When it comes to Australian legends, Olivia Newton-John proudly sits at the top of our list.
There isn't much the 72-year-old hasn't achieved, and with her 73rd birthday approaching we're taking a stroll down memory lane.
In celebration of her incredible life and career, let's remember all of her best moments over the years.

Olivia Newton John was born in England on the 26th of September 1948 to parents Irene and Brinley Newton-John.
She is the youngest of three children, along with brother Hugh and sister Rona.
When Olivia was six, the Newton-John family relocated from the UK to Melbourne in 1954.
It was clear from a young age that Olivia was destined for something magical.
At 14, she formed her very own girl group and dabbled in TV.
It was during her time on Go Show that Olivia met Pat Carroll and John Farrar. Pat would go on to become Olivia's duet partner and John their music producer.
Her journey really began when she came first on Sing, Sing, Sing - a talent show hosted by the legendary Johnny O'Keefe.
Olivia's prize was a trip to the UK – which surprisingly she didn't want, but her mum encouraged her to take a chance.
The aspiring songstress found moderate success in the UK and America after she released her first solo album, If Not For You, in 1971.
FUN FACT: Olivia's third cousin is British-Australian author Ben Elton.

In 1974, Olivia was put on the world's map when she entered the Eurovision Song Contest on behalf of the UK.
Olivia sang Long Live Love and her ballad saw her come fourth.
FUN FACT: The Eurovision Song Contest's 1974 winners were Sweden's entrant ABBA. The Swedish dance icons sang Waterloo.
Despite not winning the song contest, 1974 was a huge year for Olivia.
WATCH BELOW: See Olivia perform at Eurovision in 1974. Story continues after video.
She released a new album with the single I Honestly Love You, which would soon become her signature song.
The year also saw her receive a bucket of musical wins including two Grammys, a Billboard award, and she was CMA's female singer of the year.
FUN FACT: In 1979, Olivia received the Officer of the Order of the British Empire (OBE) medal from Queen Elizabeth at Buckingham Palace.

Olivia's star power truly is something to behold.
Showing no signs of slowing down, everything changed dramatically in 1978 when she starred alongside John Travolta in the film adaptation of the Broadway musical Grease.
Becoming the year's biggest movie, it unsurprisingly made the duo into Hollywood mega stars.
The soundtrack spent 12 weeks on the top of the charts, and it gave Olivia three top five singles:
Olivia's role in the film earned her a Golden Globe Best Actress nomination and an Oscar nod for the soundtrack. 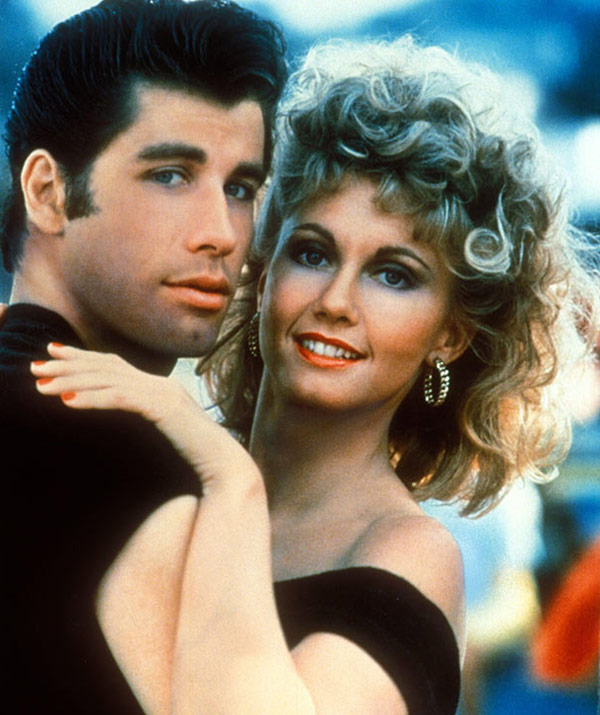 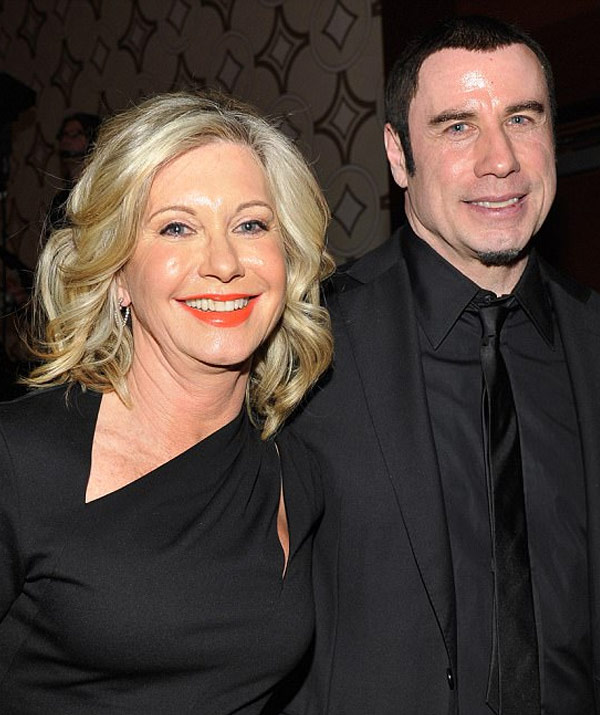 Taking inspiration from Sandy's transformation from good girl to bad, Olivia was inspired to vamp up her image.
That meant a brand-new look, including a whole lot of spandex and some very raunchy hits including A Little More Love and Deeper Than the Night.
But the song that redefined Olivia was the double platinum single Physical.
Who knew working out could be so damn sexy? 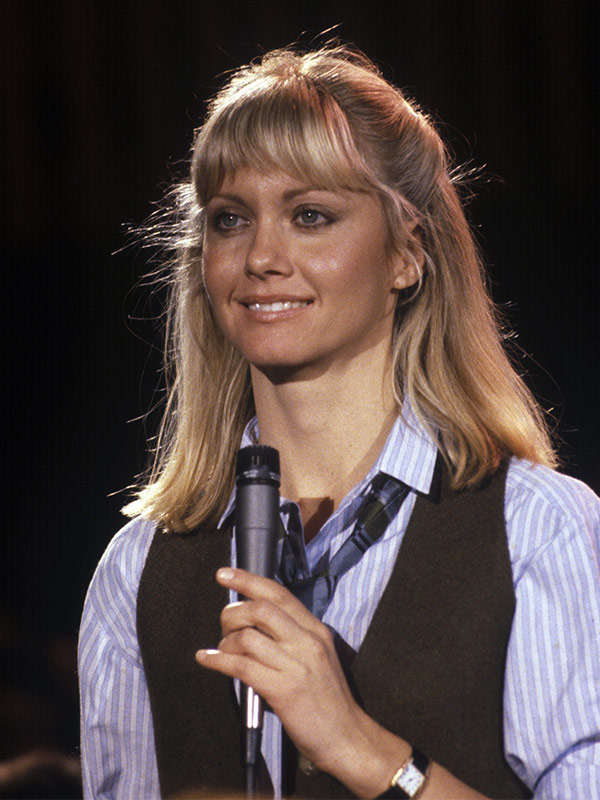 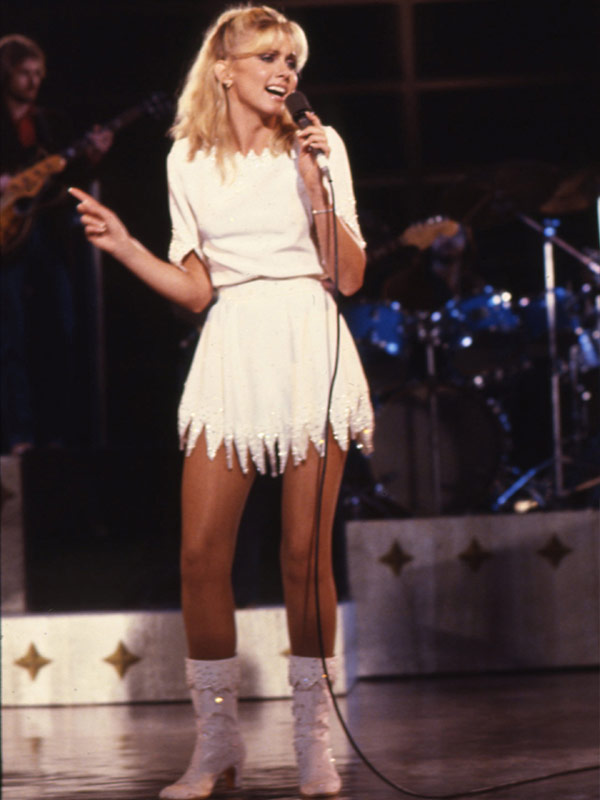 ← Slide →
The year was 1981, and suddenly spandex became the international symbol for sex.
In fact, Olivia's jam created such a frenzy that the song was banned on some radio stations in the US.
She also became a pioneer for lively videos clips with her unforgettable aerobics-themed clip.
In 2010, Billboard magazine ranked Physical as the most popular single ever about doing the deed.

MATT LATTANZI
In December 1984, Olivia married her boyfriend of four years Matt Lattanzi.
The couple met on the set of Xanadu and share one child – 32-year-old daughter Chloe Lattanzi.
Slightly short of a decade, the pair divorced in 1995.
PATRICK McDERMOTT
A year after her divorce, Olivia met gaffer and cameraman Patrick McDermott.
The pair had an on-off relationship for nine years, up until he mysteriously disappeared in 2005 after a fishing trip off the coast of California.
Ever since 2010, there have been multiple claims that Patrick is alive and well, living in Mexico under his birth name Pat Kim.
Some believe he could have faked his own death after filing for bankruptcy.

Everything we know about Patrick McDermott

- Did he fake his death? Olivia Newton-John opens up about ex's disappearance at sea

- Olivia Newton-John speaks out about her missing ex-partner

JOHN EASTERLING
Olivia married her second husband John Easterling in 2008.
The pair had met 15 years earlier, but things only took on a romantic nature in 2007.
After a whirlwind romance the pair tied the knot and have been happily married ever since, Olivia regularly sharing romantic snaps of them together on Instagram.
John has supported Olivia through her breast cancer journey and appears to be her biggest supporter.

Chloe Lattanzi is Olivia Newton-John's only child.
The mother-daughter duo share a close relationship and Olivia has shared sweet snaps of them together on Instagram.
As well as posting recent photos with her daughter, Olivia regularly posts adorable throwbacks to Chloe's childhood.
FUN FACT: In 2015 the ONJ and Chloe recorded You Have To Believe- a re-imaging of her 1980 single Magic from Xanadu.
Speaking about the track, which became the first mother-daughter single to reach No. 1 on the Billboard Dance Club Play chart, she said: "I met Chloe's dad on the set of Xanadu, so, without that film, Chloe wouldn't be here.
"She was the real 'magic' that came out of that film!"
READ NEXT: See Chloe Lattanzi's plastic surgery transformation

Breast cancer and her philanthropic efforts

Olivia was first diagnosed with breast cancer in 1992, just days after her own father had passed away from cancer.
Following eight months of chemotherapy and a partial mastectomy, Olivia was cleared of the disease.
Sadly year in May 2017, tests revealed that she had a metastasised cancer tumour growing at the base of her spine.
The shocking news rocked Olivia and her family.
In December 2019, the Aussie icon shared a very positive update on her condition.
"I am no longer in pain and happy to say I am working again," she told Closer.
"When I get to sing the songs I love, it's like a gift," she revealed. "Being on the road with my band has been healing for me."
"Of course, it was scary," she admitted of being diagnosed with cancer again after successfully beating the illness 25 years ago.
"But the words that came to my mind were 'This too shall pass!' I just had to believe that I was going to be OK."
Since her diagnosis over 20 years ago, Olivia has been a strong breast cancer advocate - regularly speaking out, encouraging women to get checked.
In 2008, she took her dream one step further, creating the Olivia Newton-John Cancer and Wellness Centre in Melbourne.

Olivia's thoughts on the Hopelessly Devoted To You mini-series

The biopic about Olivia, released in 2018, chronicled her debut on "Sing Sing Sing", her musical and acting career, and her venture into the corporate world.
It starred Delta Goodrem as Olivia, but the real-life songstress wasn't keen on the idea at first.
Olivia says she was initially "horrified" by the project, revealing: "I realised it was going to happen whether I wanted it to or not."
"I love Delta. I think she's a really good actress and a great singer so that made it okay, because we're friends", she told the Australian Women's Weekly.
"In the beginning she called me and asked, 'Shall I do it or not?' First I said, 'I'm not sure,' and then I said, 'Oh you do it'.
"I haven't read it and I don't know how accurate it is because it's a movie and people weren't there at every moment of my life but the money will go to the hospital [the Olivia Newton-John Cancer Wellness & Research Centre in Melbourne] so some good has come of it."
Despite her hesitations, Olivia chose to work with Delta to record music for the series' soundtrack.

When the coronavirus pandemic shut the world down, Olivia retreated to her farm in California.
Speaking to the Weekly in September, she opened up about her bonds with family and nature, and how they helped her through the dark days of the COVID crisis in the US.
"I was very afraid at the beginning," she admits.
"I think we all were … It was a scary time for everyone because it was unknown.
"I was lucky to be living outside the city – I'm grateful for that – and in my own life, I've tried to turn this into something positive, because it's given us all the opportunity to find out who we are, who the family is and get down to the really important things."
She spent plenty of time with husband John and daughter Chloe during the pandemic, even helping Chloe plan her postponed wedding.
Mostly though, she says, "I'm grateful for life. After all I've been through, I'm just very grateful that I'm here."