Squeezing myself into the carriage, I looked at my friends in excitement.
"I'm not scared!" I told them.
A group of us had come to Movie World on the Gold Coast to ride the roller-coasters.
I loved the thrill of hurtling upside-down and through the air.
But as the attendant came over to lower the security bar and make sure we were all strapped in safely, he looked concerned.
The bar couldn't lock over my bulging body.
"Umm, can I get you to move to the back carriage?" he asked.
My face instantly turned bright red with shame.
Hauling myself out, I felt the other passengers glaring at me.
We should have been whizzing around by now, but I'd held everyone up.
Once I was in the new seat, the attendant struggled to click the bar over me.
Other riders looked over their shoulders to see what the delay was as the attendant strained to close it.
When it finally jolted forward, I felt no joy, no excitement, just humiliation.
I was 29 and weighed 136kg.
I'd struggled with my weight my whole life, stuffing myself with junk food and doing anything to avoid exercise.
Although I'd married the man of my dreams, Broden, I was also hiding a shameful secret from him.
Most days, when I finished work as a primary school music teacher, I'd stop off at the shops and buy packets of Tim Tams and other snacks.
I'd eat the lot and hide the wrappers before Broden arrived home from work.
I was disgusted with myself, and the worse I felt, the more I'd gorge on the unhealthy treats.
It was a vicious cycle.
Over the years, I'd tried every diet going, living off soups or foul-tasting lemon drinks.
Sometimes I'd drop a few kilos, but the weight never stayed off for long.
Broden was concerned for me and knew how unhappy I was, but never criticised my body.
"We could exercise together," he suggested once. But just walking up a flight of stairs puffed me out and my asthma meant that playing sport was near impossible.
In the classroom, if I was on my feet for too long, I had to sit down.
Some of the other teachers were loud and animated, making their classes exciting for the students.
But I just felt lethargic and I worried it was rubbing off on the kids.
I wished I could do more to motivate them, but I could hardly even motivate myself.
Then, one day in class, a seven-year-old girl walked up to me.
"Hello Mrs Fat," she said, smiling.
I stared at her in complete shock, unable to reply.
She didn't even realise she was being cruel, she was just being honest.
This is what the kids think of me...
I spent the rest of the lesson in a daze, unable to get those two words out of my mind: Mrs Fat.
My 30th birthday was coming up, so on a whim, I joined the Cambridge Weight Plan and a consultant talked me through how to transform my diet.
Gone were the rich, creamy pastas and potato bakes lathered in butter.
And my Tim Tam pit stops came to a halt.
I lost 5kg in the first week, and by the time my birthday rolled around two months later, I'd shed 17kg.
I even refrained from eating any of my own cake!
But it wasn't just my diet that had changed – on weekends, Broden and I went bushwalking.
At first it was tough, but week by week I managed to push on a bit further.
"I'm so proud of you," Broden said, wrapping me in a hug.
Soon, I was down from a size 22 to a 10. I currently weigh 66kg – less than half my former body size! 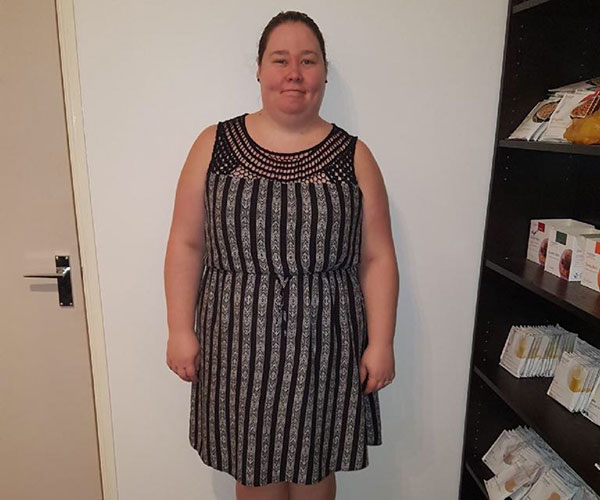 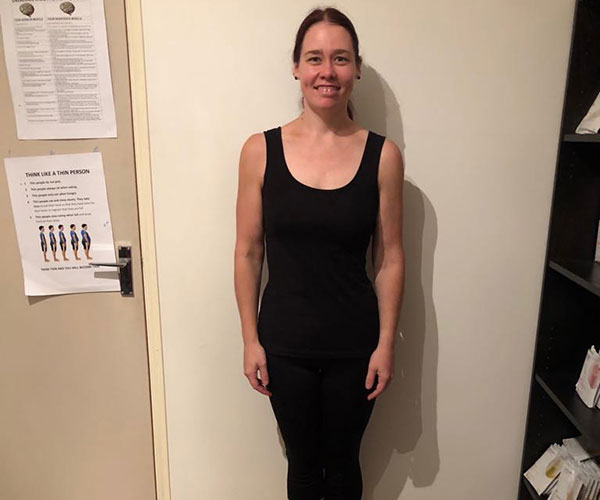 ← Slide →
"Wow, Miss, you've lost so much weight!" one student gasped when she walked into class.
Lots of others egged me on and congratulated me.
The little girl who'd made that comment all those months ago didn't know it, but she'd been a big part in my motivation.
Now, I'm full of energy in the classroom and plan on becoming a Cambridge weight consultant.
I wish I'd changed my ways earlier, but I'm so grateful that I sought help when I did.
No-one's called me Mrs Fat since, and it's a name I hope I'll never hear again.