They left it till the last minute, but our weekend has officially just been made.
Prince Harry and Duchess Meghan just dropped a brand new photo of their new baby son, Archie Harrison Mountbatten-Windsor, who was born last month on May 6 - and suffice to say we're in love with that adorable little face!

This marking only the second time we've laid eyes on the wee bub's face, the rare glimpse of baby Archie couldn't be any more special - especially considering why the new picture was shared in the first place.
Taking to their official Instagram account on Father's Day in the UK, Sussex Royal shared the adorable new picture alongside the caption: "Happy Father's Day! And wishing a very special first Father's Day to The Duke of Sussex".
Feast your eyes, folks - this one is going straight to the mantelpiece!
The new picture has been met with glee from the royal's fanbase, with the post garnering thousands of likes within its first few minutes of going live.
"Oh my word 😍," wrote one ecstatic fan.
Meanwhile, another said: "My heart😭😭. Little Archie! Thank you for sharing."
We can't help but agree with them - the new picture is absolutely adorable!
While our first glimpse of baby Archie was just days after his birth, we next saw the newest member of team Sussex on Mother's Day in May, when the royal couple shared a picture featuring baby Archie's little feet over a flower bed of forget-me-nots.
The beautiful flower was known to be a personal favourite of Harry's late mother, and Archie's grandmother Princess Diana.
This is a particularly special moment for royal fans, as we haven't yet been able to have a proper look at baby Archie's face since his birth.
During the first photo shoot, the royal bub was so tightly wrapped up in his father's arms that we only saw a little sliver of his face.
But this time, we get to see exactly who he looks most like.
Yep, you've heard it here first folks - we're seeing some major Prince Harry similarities here - just look at those doe eyes! 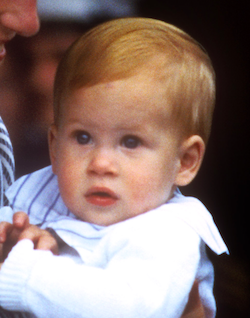 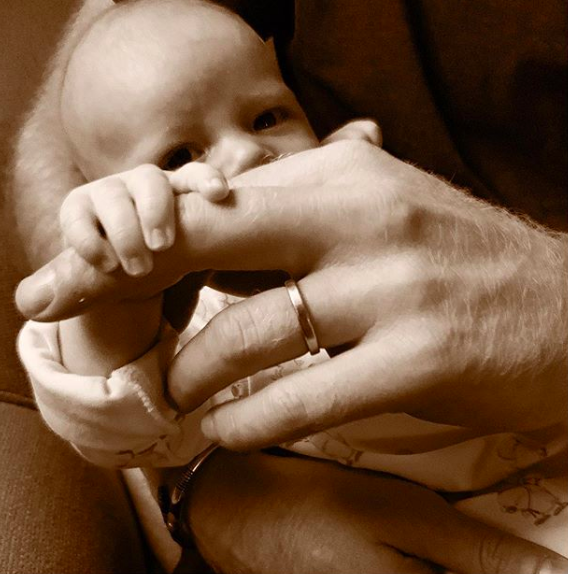 ← Slide →
Earlier in the day, the British royals shared a number of sweet pictures to mark Father's Day in the UK.
On the Kensington Royal official Instagram account, a sweet picture of Prince William and Prince Louis was shared alongside the caption: "Happy Father's Day!"
The picture was taken during the Cambridge family's recent outing to Kate Middleton's Chelsea Flower Show garden design, where it was also revealed that Prince Louis could walk!
Watch the Cambridge kids playing in the amazing clip below!
Meanwhile, Clarence House also shared a sweet tribute to both Prince Charles and Prince Philip.
One post by the account featured a beautiful professional photo taken for Prince Charles' 70th birthday in November 2018. Prince Harry and William stand with their father laughing in the candid snap.
"To Dads everywhere, have a wonderful Father's Day," the post read.
In the second post, Prince Philip is seen with a young Prince Charles and Princess Anne, as he and Queen Elizabeth look on smiling.
"Prince Charles and Princess Anne play on a seesaw with the help of their father The Duke of Edinburgh while The Queen looks on during a visit to Balmoral in 1957.‬"
What a beautiful way to mark a special day for dads across the world!