I chucked the rejection letter in the bin and reached for my two-litre bottle of Coke.
"How am I supposed to get experience if no one'll give me a bloody job?" I sighed before taking a swig.
I'd finished high school months earlier and moved from my home in Townsville to Brisbane to live with my sister, Zana.
I'd been applying for jobs in retail, admin and construction but no one would give me a start.
Every employer said they wanted someone with 'experience'.
It seemed impossible to get a fair go.
READ: Real life: I was addicted to McDonald's!
As I continued looking for work over the following year, I spent my days watching TV, playing X-box and gorging on take-aways.
Most days I'd eat three big burgers and fries for lunch, washed down with two-litres of sugary soft drink.
I'd always been a big kid – my entire family was overweight.
But it had never really bothered me because I was a happy-go-lucky bloke.
I'd always had lots of mates and played footy at school.
I'd never been ashamed of my large frame.
As I continued to pack on the kilos the following months, I bought bigger, baggier clothes.
By the time I moved back to Townsville after 18 months in Brisbane, I'd ballooned to a size 12XL t-shirt.
I hadn't even started looking for work when my mate Nick offered me a job.
"It's a door-to-door sales job," he said. "And it'll be hot out there."
I had to admit it was a bit daunting.
I hadn't exercised since I'd left school.
I could barely walk around the block without gasping for breath. But I was so desperate to earn a crust, it didn't matter.
"When can I start?" I asked.
The first few weeks were a struggle, huffing and puffing in the sweltering heat for 11 hours a day.
By the time I arrived home, I'd be so exhausted that I'd have a shower and crawl straight in to bed, without having dinner.
But I wasn't giving up.
I didn't have any scales to weigh myself, but I noticed my clothes felt baggier at the end of each week.
After six months, I'd shrunk down four shirt sizes to a 9XL.
"You've lost a bit of weight, boy," Mum said.
After six months of sales, I gave up the job to stack shelves at the local supermarket.
It was such a tough, physical job and I was always on my feet.
Being so busy also stopped me from gorging on junk food, so I continued slowly shedding the kilos.
When I was 21, Mum suggested I undergo gastric sleeve surgery to shift the extra kilos.
"It worked for your sister and me," she said. "And you'll feel so much better."
She was right.
Mum and Zana had both lost around 60kgs since undergoing surgery to reduce the size of their stomachs.
And they didn't just look better – they both seemed so much happier too.
They had a new air of confidence about them.
While I'd never really worried about my size, I knew deep down my weight was holding me back.
I felt too fat too even ask a girl out on a date.
"I'll make an appointment," I told Mum.
My nerves jangled when I arrived for my consultation with the surgeon.
After conducting blood tests, he asked me to step on the scales.
My heart thudded in my chest as I watched the needle rise until it finally hovered at 183kgs.
I must have weighed more than 200kgs before I started working, I thought in horror.
He placed me on a strict pre-op diet which involved replacing my burgers and chips with shakes, small portions of protein and vegies.
It was tough at first and I craved starchy, fatty carbs and ice cold Coke.
But I was determined to stick it out.
It paid off when I weighed in at 150kgs before my op.
"You're well on your way already," Mum said. 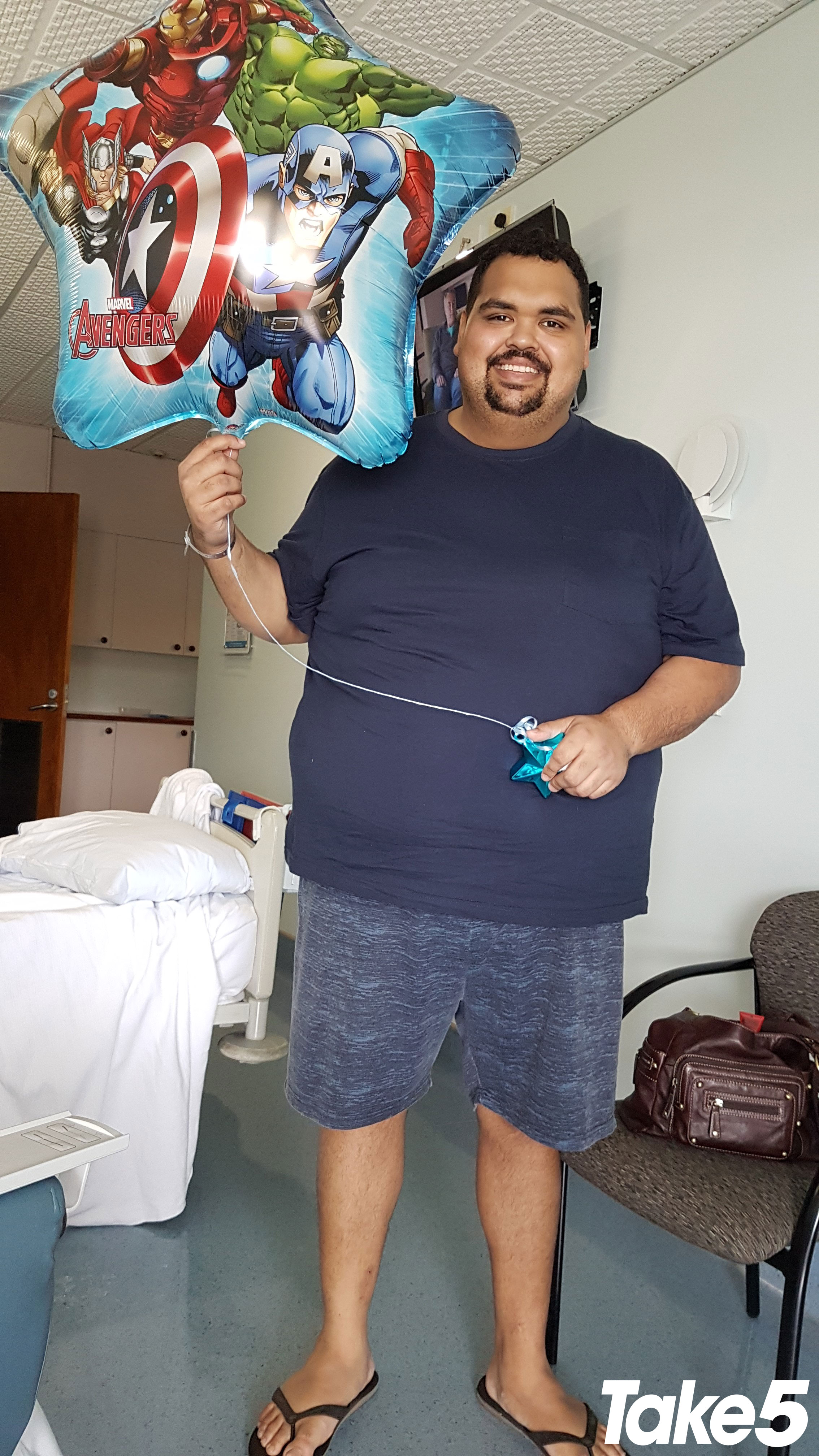 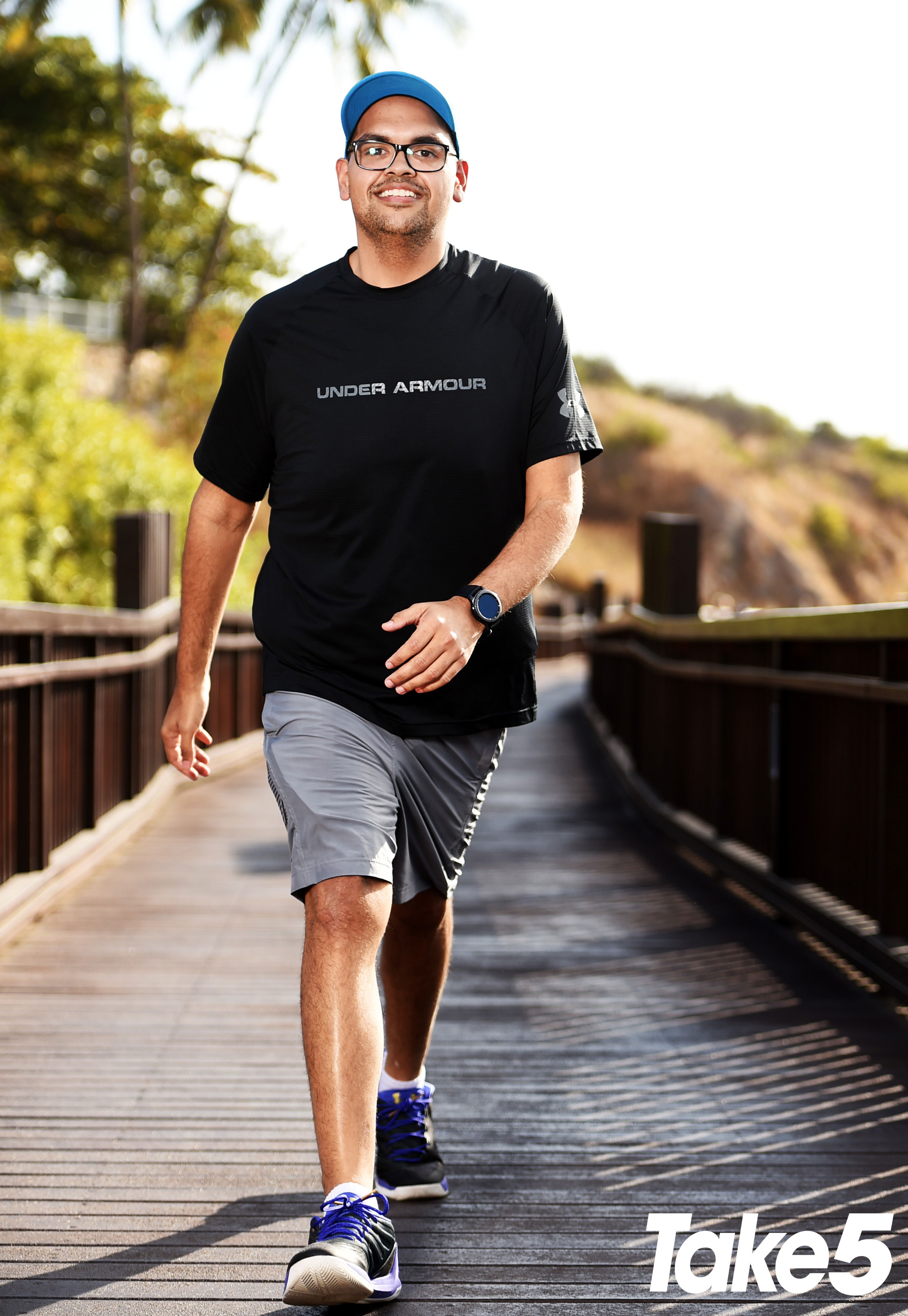 ← Slide →
Thankfully, the surgery went smoothly and I didn't experience any pain afterwards.
Once I was back at work, I started going for walks to help shed the kilos.
While we could only eat tiny portions, Mum and I enjoyed experimenting with recipes, like satay chicken and salads.
As the weight fell off me, my confidence grew and I even joined the local gym.
Within a year, I'd slimmed down to 99.9kgs.
"You're half the size you were," Mum said.
Almost 18 months have passed since my surgery and I've lost almost 100kgs to weigh a trim 86kgs.
I feel like a whole new person.
My weight loss has given me such a confidence boost that I recently started doing stand-up comedy at open-mic nights.
I'd never have been brave enough to do that when I was obese.
I recently set myself a new goal – to find love.
I've never had a girlfriend before, or even been on a date, but I pride myself on being a loyal, honest and respectful guy with a lot to offer.
The main thing I've learned from my weight loss journey is I can achieve anything if I put my mind to it.
Now, I'm planning on putting my mind and my heart in to searching for a lovely lady.
If you think you could be the right woman for Rennie, send us an email at take5@bauer-media.com.au
WATCH: Rob Kardashian shows off his weight loss in a rare selfie: