Behind personal trainer Jacqui Grant's slim physique is a lifetime battle with obesity so severe it almost killed her.
After shedding two-thirds of her body, the Melbourne mum-of-two now weighs just 55kg and is a picture of happiness and health.
It's hard to believe that only two-and-a-half years ago the 52-year-old former nurse faced a terrifying brush with death after tipping the scales at 158kg.
"I came home from my office job one day and said to my elder son, 'I don't feel right' and went to bed without dinner," Jacqui recalls. "It wasn't long before I realised my heart rate was 120 beats per minute. I raced out and said, 'We need to call an ambulance!'"
By the time paramedics arrived, Jacqui's heart rate had risen to a frightening 160 beats per minute and kept soaring – eventually hitting a deadly 200 beats per minute by the time she arrived at hospital.
"I knew if we couldn't get my heart rate down, I wouldn't live through this experience," says Jacqui, the shock of her life-and-death moment in June 2016 still clearly vivid in her mind.
"I knew my obesity was part of it, but it was the look of fear on my kids' faces [Joshua, now 27, and Daniel, 24] that made it so much worse.
"I vowed then and there if I live through this I'm going to do whatever it takes to be fit and healthy. I wanted to be a grandmother one day."
Slide across to see Jacqui's amazing before and after. Image L-R: Supplied and Tina Smigielski 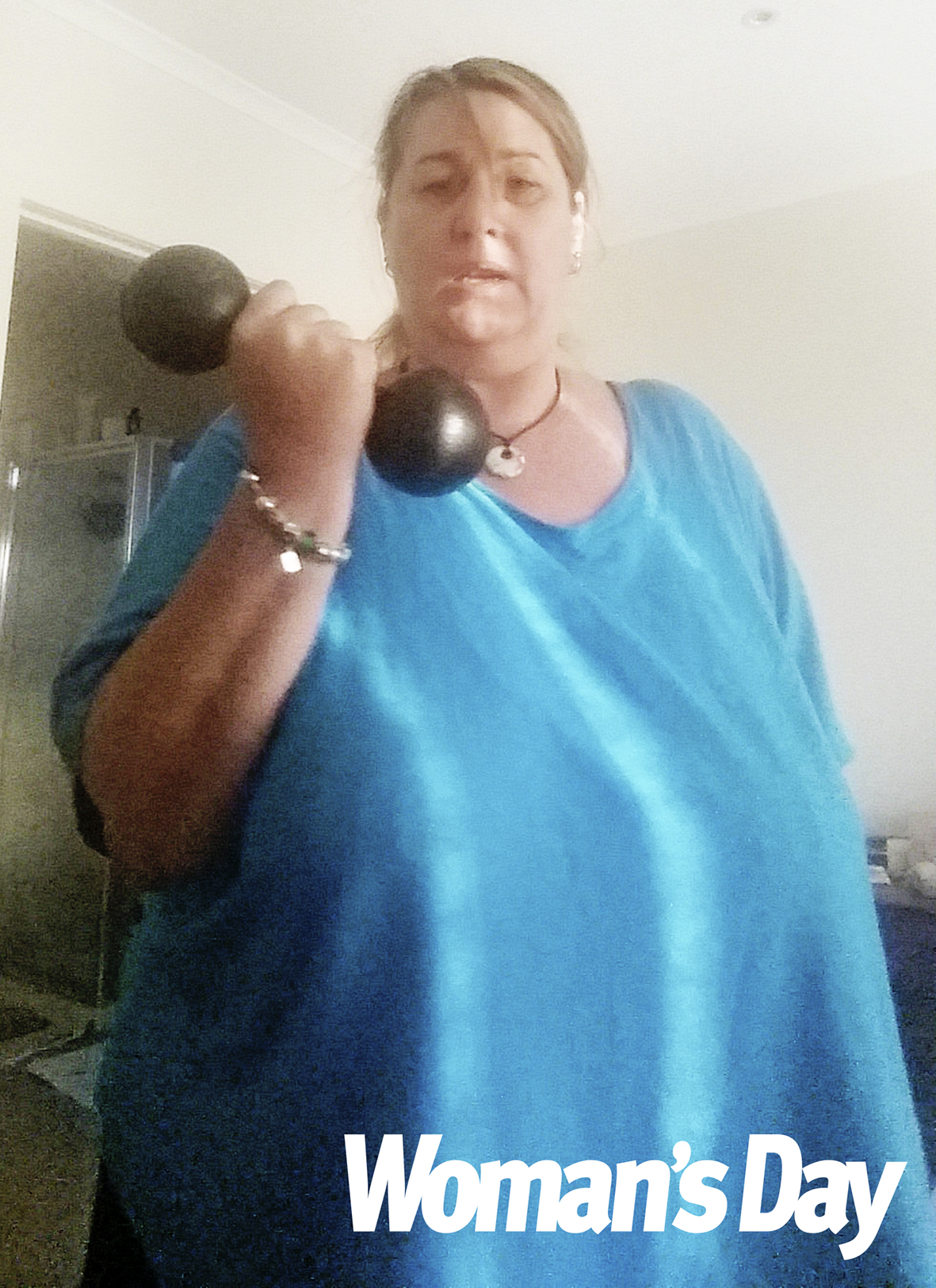 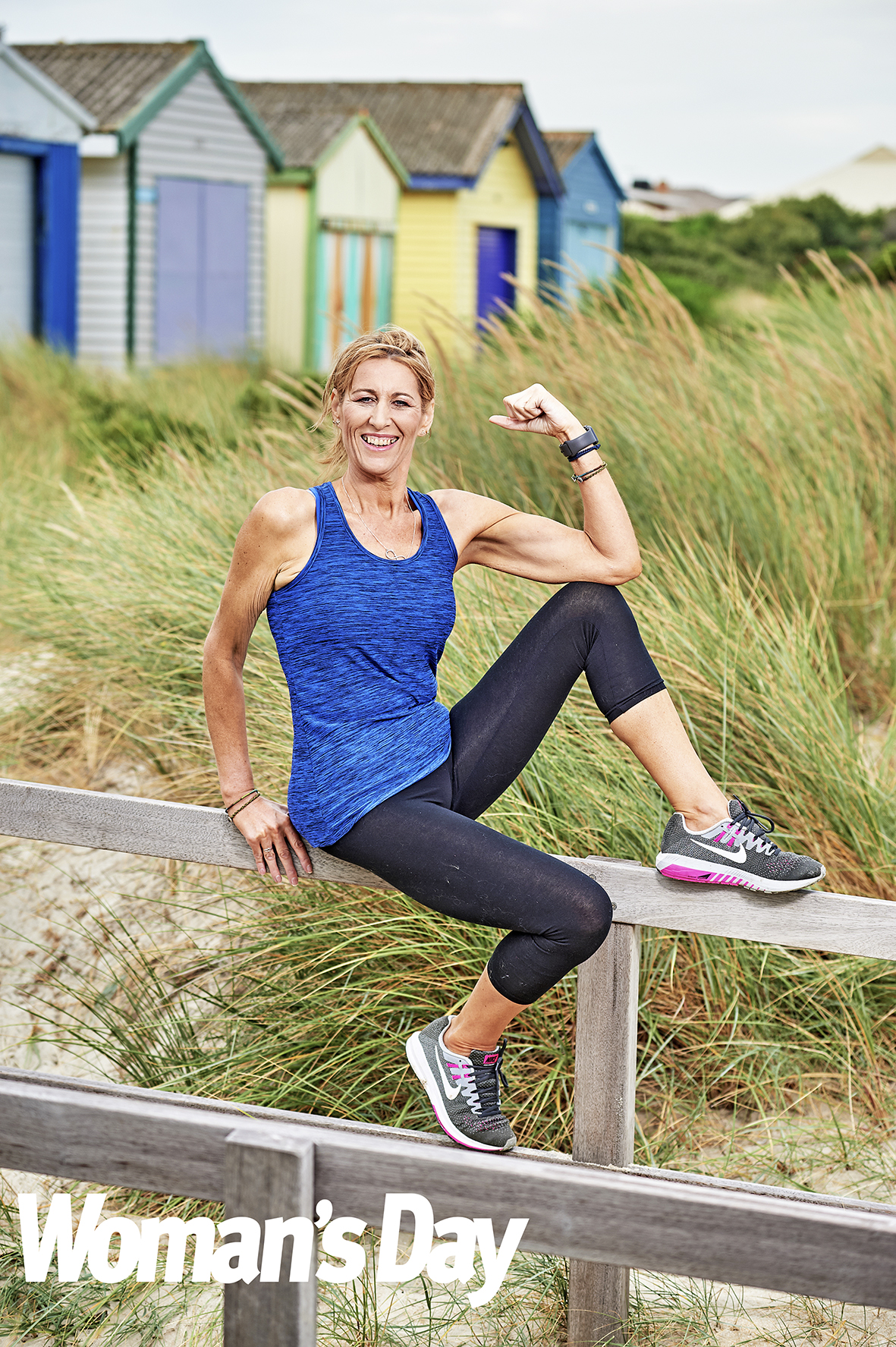 ← Slide →
Jacqui underwent a bariatric procedure known as sleeve gastrectomy, where part of the stomach is removed.
But it wasn't until a psychologist pointed out she ate for emotional reasons that the penny dropped. Suddenly Jacqui knew she could totally change her life.
"I had never, ever, made the connection between eating and my emotions," she says.
WATCH: Incredible celebrity weight-loss transformations. Post continues below...
Jacqui had battled weight issues for 30-plus years, hitting 100kg when she was 21 and forced to wear size 20 clothes.
Life then started dealing Jacqui a series of crushing blows: her first child was stillborn, she suffered two miscarriages and both her first and second marriages failed. She was also becoming increasingly unhappy at work.
In 2011, Jacqui's second husband left her for someone else. "I stopped exercising and just ate", she concedes.
"I got up, went to work and came home. I was just being there for my kids. I had no life."
Muffins, six sugar-filled cappuccinos, creamy salads and fried food filled her daily diet.
"Then, by Friday nights, I was so unhappy I'd come home, sit in front of the TV with a family-sized bag of chicken chips and a family-sized block of chocolate and mindlessly eat.
"At my heaviest, I'd be out of breath walking from my bed to the ensuite.
"It was so disheartening – I was existing but I wasn't living."
Jacqui has not only shed 100kg in just over two years, but also become a personal trainer and recently published her guide to help other overeaters called Break Free & Go For It!.
She is launching her own coaching and training business breakfreewithjacqui.com, which will offer a series of multi-day programs, so others can undergo transformations as seemingly miraculous as her own.
"Now I'm high on life," enthuses Jacqui, who has successfully maintained her weight between 53kg and 56kg since September last year. "I'm social, I'm going out more – and I've even sung at an open-mic night!"