As an Australian-born princess, Crown Princess Mary of Denmark is without a doubt one of our favourite royals.
With her sophisticated and chic style, she's quite the icon but when she and Crown Prince Frederik hosted the Swedish Crown Princess Victoria and Prince Daniel at their Danish palace home, we couldn't help but notice that the two Scandinavian royals bear quite the resemblance.

The Swedish royal couple are visiting Denmark for a three day state visit to develop the relationship between their countries with a particular focus on the health sector and the green transition.
But when the two couples stepped out for their latest royal engagement on board the Swedish warship HMS Nyköping, Crown Princess Mary and Crown Princess Victoria looked remarkably similar in their evening attire.
READ MORE: Meghan and Kate who? These unsung royals are the ultimate fashion icons.
The royal couples later met with the Swedish ambassador HE Fredrik Jörgensen and his wife for a dinner at the Swedish Embassy in Copenhagen where they posed for a photo.
With the exception of Crown Princess Mary's white jacket, the two future Queens shared many similarities from their chic brunette up-dos, to their pale pink and gold dresses right down to their classic nude heels.
And with their handsome princes dressed in suits, the royal couples are the dream team we never realised we needed in our lives!
What's more, earlier that day Crown Princess Victoria's stunning red midi dress made us think of a similar frock hanging in Crown Princess Mary's wardrobe.
The foursome attended The Confederation of Danish Industrys annual meeting where the Swedish Queen-to-be delivered a speech and her House of Dagmar dress looked a lot like the one Princess Mary wore back when she visited Texas earlier this year.
Have these two been exchanging style tips? 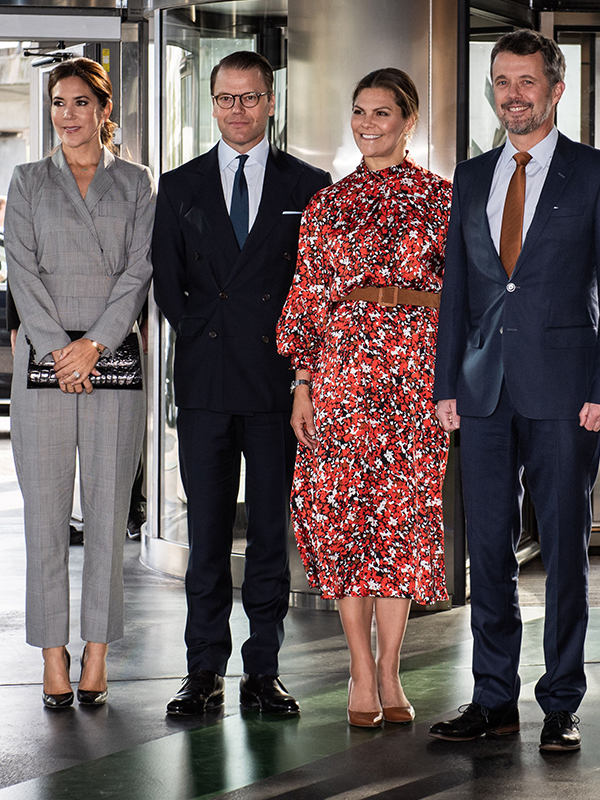 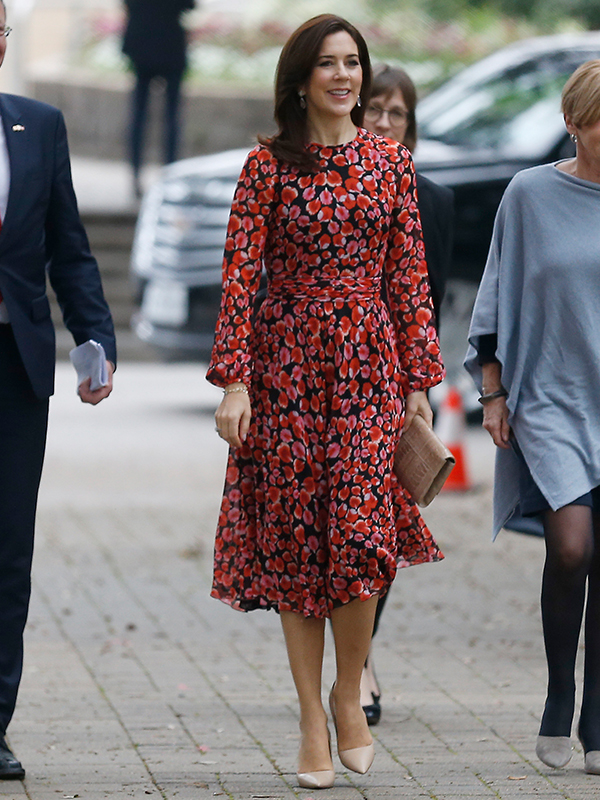 ← Slide →
Come to think of it, a third royal who's also a pro in the style stakes wore a similar dress across the seas in London.
Duchess Catherine's Michael Kors dress that she wore to drop Princess Charlotte off at her first day of school also resembles the Crown Princesses' frocks. Seriously, do they have a group chat or something?
WATCH: Princess Charlotte heads to her first day of school. Post continues after video...
On their first day in the Danish capital, Crown Prince Frederik and Crown Princess Mary hosted a private dinner for the Swedish royals at their home in Amalienborg Palace.
Aside from getting a rare glimpse into their lavish living quarters, we also saw the princesses' similar casual yet stylish approaches to off-duty fashion.
The Danish royal family shared two snaps from their meeting on the official Det Danske Kongehus Instagram account and with their long sleeved patterned dresses, they simply affirmed how similar their fashion senses are.
In fact, so did the princes in their collared shirts and smart trousers.