This week, Princess Eugenie will marry her long-time partner Jack Brooksbank in a ceremony that is sure to turn heads across the globe.
But why are we so sure this royal wedding will be such a spectacle you ask? Because 32 years ago, her parents Sarah Ferguson and Prince Andrew did the exact same thing, and boy was it a sight. 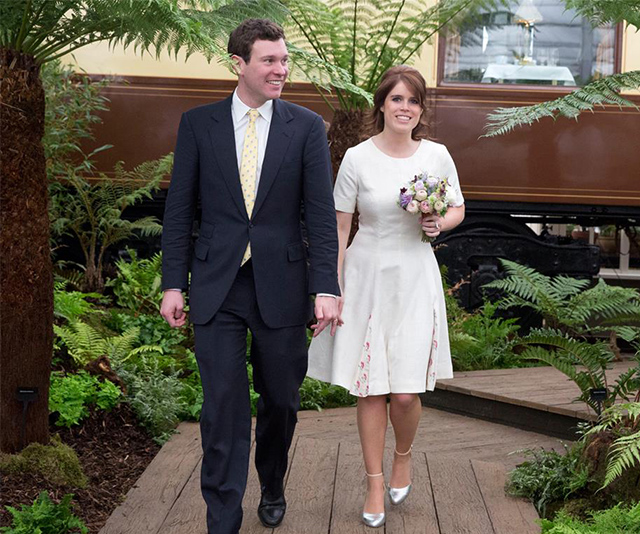 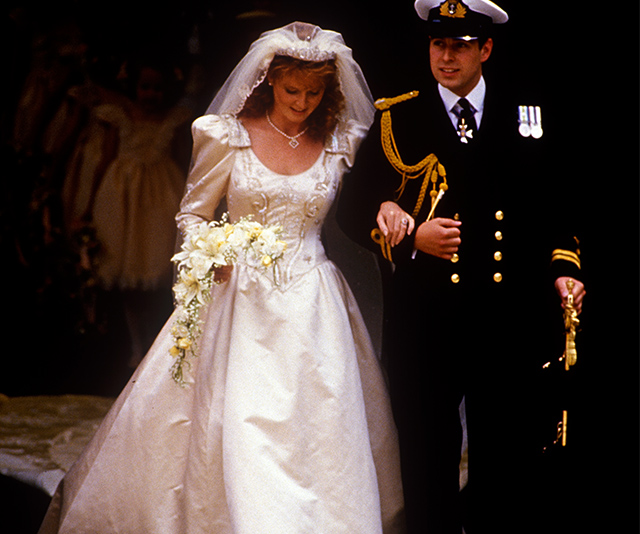 ← Slide →
The wedding between Sarah Ferguson and Prince Andrew took place on July 23, 1986 at Westminster Abbey, and as the fiery red head arrived by carriage, there was no denying this day, and that dress, were going to leave a big impression on British royal history.
Embodying true 80s style, Sarah's voluminous gown with intricate bead work by British designer Lindka Cierach was a sight to behold, while the bright and bold guest fashion meant no one was getting lost in the crowd.
Watched by an audience of an estimated 500 million, Sarah and Andrew's big day was attended by high-profile guests from across the world. Along with the royal family themselves, US First Lady Nancy Reagan and Prime Minister Margaret Thatcher were among those in attendance.
WATCH: Sarah Ferguson talks about her royal wedding:
Story continues below...
As for Eugenie's wedding this week, we're keeping our fingers crossed for another explosion of colour to rival the 1986 affair.
While Fergie and Andrew may have called time on their marriage in 1996, the pair have remained the friendliest of exes.
In anticipation of their daughter's big day, we've taken a retrospective look at the wedding of Sarah and Prince Andrew.
Keep scrolling (and maybe don your sunglasses) for all the images from the bright and bold event.
1 / 0

Much like that first glimpse we received of Duchess Meghan through the window of her car on the way to her wedding back in May, all eyes were on Fergie's carriage as she pulled up to Westminster Abbey.

Queen Elizabeth II and Prince Philip waved to crowds as they arrived to watch their son, Prince Andrew, take his vows.

The Queen Mother and Princess Margaret also came by carriage. Their bold shades of blue and feathered headpieces are a sign of the daring fashions to come.

Prince Charles and Princess Diana pull into the festivities.

The wedding, which was watched by 500 million people globally, was the talk of the town. Here, Billy Connolly, actress Pamela Stephenson and NBC News' Jane Pauley and Bryant Gumbel discuss the festivities from outside Buckingham Palace for TODAY. Some iconic 80s fashion happening here!

Sarah Ferguson was walked down the aisle by her Father, Major Ronald Ferguson. The song Imperial March, by Edward Elgar played as they proceeded.

She didn't do things by halves - Sarah's train was 17 ft long!

Alice and Andrew Ferguson, the half-sister and half-brother of Sarah, set the bar for young royal bridal party members to provide light entertainment in the weddings that have followed!

The royal couple were a sight to behold as they exited the church.

The bride's dress, designed by British designer Lindka Cierach, in all its glory!

In true royal fashion, Sarah and Andrew departed the service via a horse-drawn carriage.

Prince William was spotted playing around with the bridal party following the wedding. Now, his son Prince George is doing him proud being known for his animated displays at weddings!

The newlyweds were all smiles after the service.

"What's that? The most iconic royal wedding of all time you say?"

We'd love to know how much that colossal train weighs! Dashing Andrew helps his bride as they walk back into Buckingham Palace.

The classic kiss on balcony shot is a must-do at every royal wedding.

The royal family: Hats, A LOT of colour, and puffy sleeves galore.

Later that day, Andrew and Sarah waved to the crowds as they left for their honeymoon in the Azores.