Prince Harry's wedding to Meghan Markle was always going to be a bittersweet celebration.
As the last and youngest son of Princess Diana to tie the knot, it's a poignant milestone that will no doubt remind Prince Harry of his mother's painful absence.
And just like his older brother Prince William did at his wedding to Duchess Catherine in 2011, Prince Harry has made sure the memory of his mother burnt bright in so many touching ways.
Obsessed with the royals? Like our Facebook page Now To Love Royals for the latest news on your favourite royal family members!

From the moment Prince Harry proposed to Meghan Markle, the 33-year-old has worked hard to incorporate Princess Diana's memory into their "crazy journey."
Their engagement photo shoot took place at Diana's favourite place at Kensington Palace, the Sunken Gardens, while Harry included two diamonds on either side of Meghan's engagement ring that were from his mother's collection.
"The main stone itself I sourced from Botswana and the little diamonds either side are from my mother's jewellery collection to make sure that she's with us on this crazy journey together," Prince Harry explained during his engagement interview last November.
"She's with us," Meghan assured her fiancé at the time.
"I'm sure she's with us yeah, you know, jumping up and down somewhere else," Harry agreed, before confessing Meghan and his mum would have been as "thick as thieves."
READ MORE: Every single must-read story on the Royal Wedding right here!
WATCH: Prince William and Prince Harry on making their mother proud. Post continues...
Prince Harry admits that after losing Princess Diana at the tender age of 12, his life descended into "total chaos."
"I can safely say that losing my mum at the age of 12, and therefore shutting down all of my emotions for the last 20 years, has had a quite serious effect on not only my personal life but my work as well," Harry explained in 2017.
"I have probably been very close to a complete breakdown on numerous occasions when all sorts of grief and sort of lies and misconceptions and everything are coming to you from every angle."
Thankfully, after seeking professional help and going to a counsellor Prince Harry has worked through his grief and totally reinvented himself from a problematic party boy, to a passionate humanitarian. There's no doubt in the world Princess Diana would be so proud of her son.
Inheriting his mother's Midas touch, Harry is the People's Prince and the most popular royal in recent history.
"I know I've got a lot of my mother in me. All I want to do is make my mother incredibly proud. I will have to, in a good way, spend the rest of my life trying to fill that void as much as possible," Harry told People magazine in 2016.
It's been two decades since Diana's untimely passing after a car crash in Paris in 1997 but for Prince Harry, Diana is still a huge part of his life.
"She was one of the naughtiest parents. She was our mum. She still is our mum. And of course, as a son I would say this, she was the best mum in the world. She smothered us with love, that's for sure," Harry said last year during an unprecedented interview to celebrate her memory on the 20th anniversary of her death.
Here are all the incredible ways Prince Harry honoured Princess Diana on his wedding day…

The royal couple invited all three of the late Princess' siblings to the wedding - Charles, 9th Earl Spencer, Lady Jane Fellowes and Lady Sarah McCorquodale.
What's more, Lady Jane Fellowes, who remains close to members of the Royal family but has shied away from the spotlight since her sister's passing, delivered a stirring reading during the ceremony.
The emotional reading made many royal fans well up, as Diana's older sister read: "My beloved speaks and says to me: 'Arise, my love, my fair one, and come away; for now the winter is past, the rain is over and gone.'"
"Set me as a seal upon your heart, as a seal upon your arm; for love is as strong as death, passion fierce as the grave."
She continued: "Its flashes are flashes of fire, a raging flame. Many waters cannot quench love, neither can floods drown it."
It was a full circle moment for Prince Harry and the Spencer family, in 1997 Lady Jane also gave a reading at Princess Diana's funeral when Harry was only 12.
Princess Diana's stunning lookalike niece Lady Kitty Spencer, 27, whose father is Charles Spencer, was also in attendance.
In a statement ahead of the wedding, the palace confirmed: "In addition to having the support of The Queen, his father The Prince of Wales, and his brother Prince William as Best Man, Prince Harry is also keen to involve his mother's family in his wedding."
"All three siblings of Diana, Princess of Wales will be in attendance and Lady Jane Fellowes will give the reading. Prince Harry and Ms. Markle both feel honoured that Lady Jane will be representing her family and helping to celebrate the memory of the late Princess on the wedding day."
WATCH: Princess Diana's sister Lady Jane fellowes gives a reading at the Royal Wedding. Post continues...

Eagle-eyed fans would have noticed Princess Diana's favourite flowers including white roses and forget-me-knots were used in several floral arrangements, most notably taking centre stage in Meghan Markle's classic yet understated bouquet.
Truly proving he is the people's prince, Kensington Palace confirmed Prince Harry hand-picked his bride's flowers from their own garden and worked with wedding florist Philippa Craddock to bring the vision to life.
"Prince Harry handpicked several flowers yesterday from their private garden at Kensington Palace to add to the bespoke bridal bouquet designed by florist Philippa Craddock. The spring blooms include Forget-Me-Nots which were Diana, Princess of Wales' favourite flower," the statement revealed.
"The couple specifically chose them to be included in Ms. Markle's bouquet to honour the memory of the late Princess on this special day. The Bride's bouquet [included] scented sweet peas, lily of the valley, astilbe, jasmine and astrantia, and sprigs of myrtle, all bound with a naturally dyed, raw silk ribbon."
Meghan Markle's adorable bridal party also donned flower crowns with Princess Diana's beloved forget-me-knots in them.
Seeing Princess Diana's granddaughter Princess Charlotte step out in the floral headpiece was a truly moving moment.
Somebody pass us the tissues, stat.
READ MORE: Prince George and Princess Charlotte steal the show at the Royal Wedding! 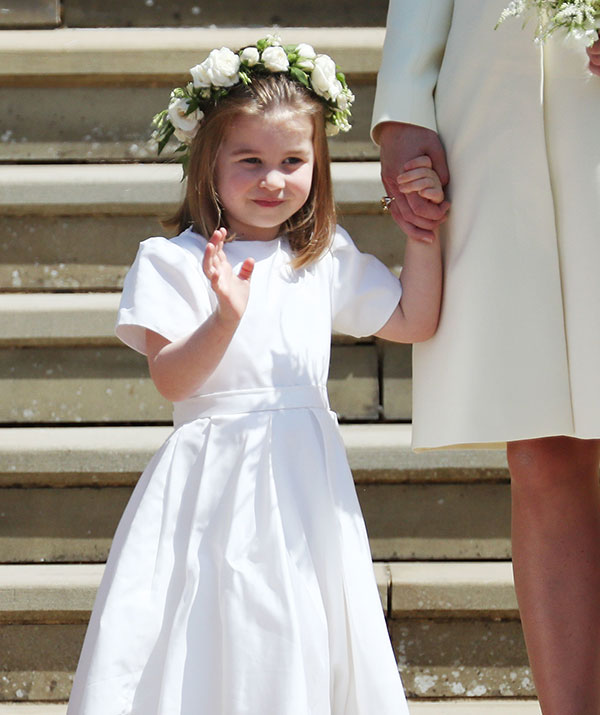 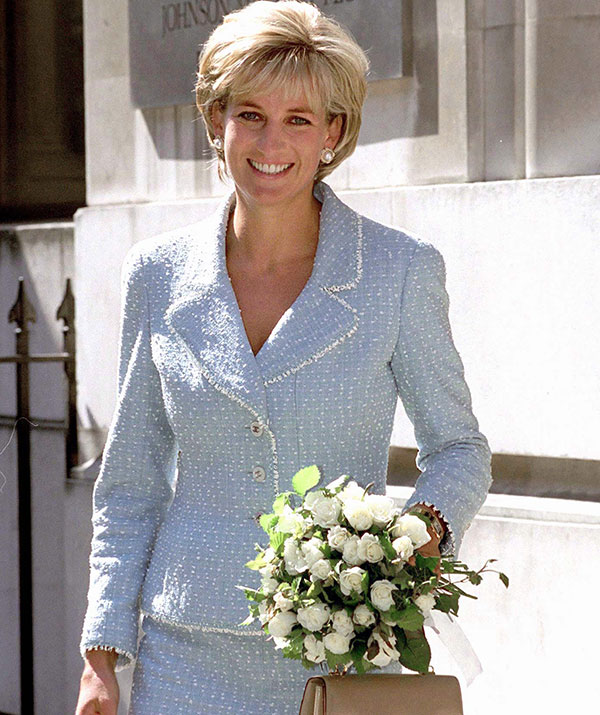 As an outspoken feminist, Meghan Markle was never going to pledge to "obey" Prince Harry in her vows.
Following in the footsteps of Princess Diana, who was the first royal bride to abandon the outdated line, the pledge to "obey" was nowhere to be seen during their Anglican wedding vows.
Diana may have only been 20 years old when she married Prince Charles, who was 13 years her senior, but the doe-eyed bride made one genius edit to the stale marriage vows she was expected to recite.
Breaking with protocol, the blushing bride removed the order to "obey" her husband and instead promised to ''love him, comfort him, honour and keep him, in sickness and in health.'' Amen to that, Lady Di!
In 2011, Kate Middleton followed her lead and included the same line in her vows to Prince William.
37 years later and it's clear Princess Diana has paved the way for both of her daughters-in-law!

The world will never forget Elton John's haunting performance of Candle in the Wind at Princess Diana's funeral.
Nearly 21 years later, in a much more joyous setting, Prince Harry invited back the star and his mother's close friend to help celebrate his marriage.
According to People magazine, the father-of-two dedicated his 1971 smash hit Tiny Dancer to Meghan Markle.
"Prince Harry asked Sir Elton to perform at the Reception which was hosted by Her Majesty The Queen at St George's Hall, Windsor Castle. Sir Elton performed for the newly married couple in recognition of the close connection he has with Prince Harry and his family," the palace said in a statement.

The couple's wedding ceremony gave another nod to Diana by including the hymn Guide Me, O Thy Great Redeemer, which was sung at the royal's funeral in 1997.

Can't get enough of the Royal Wedding? Check out our full coverage here:

Meghan Markle's tiara is an heirloom piece and so stunning

The bridesmaids and pageboys of the 2018 royal wedding are royally adorable!