It's been a huge few months for the British Royal Family with birthdays, babies and weddings aplenty.
On May 2nd, Princess Charlotte rung in her third birthday and now it's been revealed the adorable thank you card her proud parents have sent out to well-wishers.
Obsessed with the royals? Like our Facebook page Now To Love Royals for the latest news on your favourite royal family members!

Prince William and Duchess Catherine have opted for the photo of their only daughter standing proudly on the steps of Kensington Palace, which was snapped by Kate in January, ahead of Charlotte's first day at nursery school at Willcocks Nursery School in London.
The tiny tot, who recently had a starring role in Prince Harry and Megahn Markle's wedding, looks stylish rocking a retro red overcoat by Amaia Kids, a pony print backpack by Cath Kidston, grey stockings, red leather buckle-up shoes, a pink scarf and a red bow in her shiny brunette locks.
Alongside the happy snap, there was a thank you note which read: "The Duke and Duchess of Cambridge thank you for so kindly writing as you did to Princess Charlotte on the occasion of her third birthday. This was most thoughtful of you, and greatly appreciate by Their Royal Highnesses who you send their best wishes." 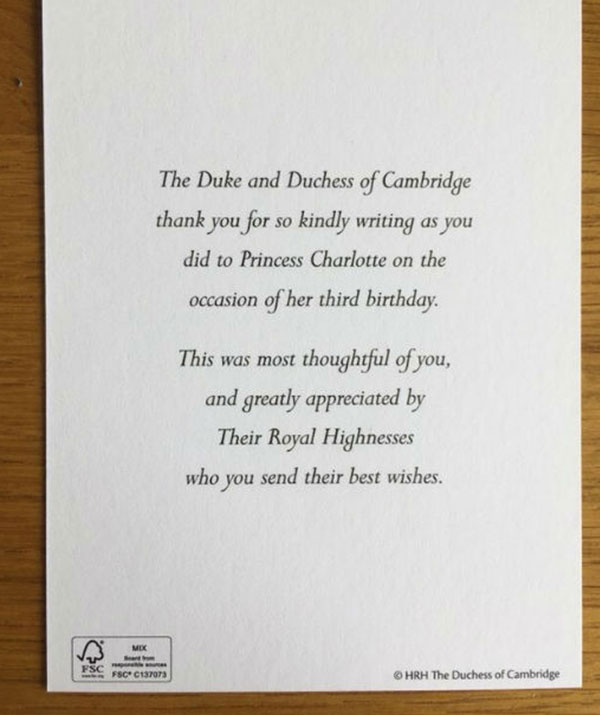 ← Slide →
Prince William and Duchess Catherine have continued to keep up the good manners, sending out snail mail to thank well-wishers who wrote in to congraulate them on their seven-year wedding anniversary on April 29th.
Instagram user Royal Addicted has revealed the photo the Duke and Duchess of Cambridge picked for their thank you cards - and it's an incredible shot they also happened to use on the same occasion last year!
The stationery is fronted with an image of the royal couple during their tour of India and Bhutan tour in 2016 and hows the pair in off-duty hiking clothes as they share a warm embrace.
"The Duke and Duchess of Cambridge thank you for the thoughtful message you so kindly sent on the occasion of their 7th wedding anniversary," the message reads. 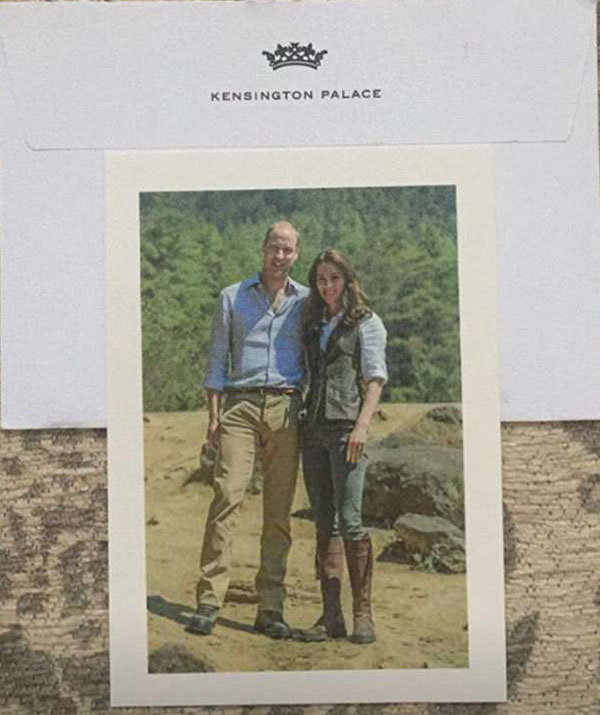 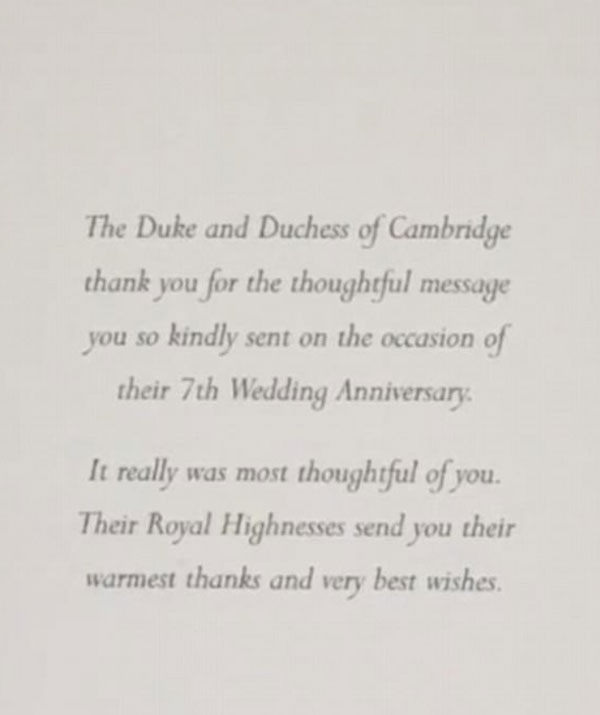 ← Slide →
Indeed, it's been an incredibly exciting time for the royals and overnight Kensington Palace gave a glimpse into just how much fan mail the family have received.
The palace's account shared a photo of their mail room, which is filled with art work and boxes of letters.
"Thank you everyone for the beautiful cards and letters following Princess Charlotte's third birthday, the birth of Prince Louis and the wedding of The Duke and Duchess of Sussex," the palace explained via Twitter.
"We've received over 36,000 letters in the past month alone."