Prince Louis' official christening photos are finally here and they're just as perfect as you'd expect!
From the way Duchess Catherine looks at her little boy with complete love, to Princess Charlotte's starring role as proud big sister - if these four new photos, which were captured by photographer Matt Holyoak, don't warm your soul we don't know what will.
Indeed, the cuteness of the Cambridge Clan can be a lot to take in so we've rounded up 6 things you may totally have missed in these new royal portraits.

Did you spot it?
The royal newlyweds are still on cloud nine after their May 19th nuptials and in the royal family portrait featuring the Cambridges, Prince Charles and Duchess Camilla and the Duke and Duchess of Sussex, if you look closely you'll see Meghan is linking arms with Prince Harry.
This loving yet subtle gesture shows just how close these two are and demonstrates the modernisation of the monarchy!
While you wouldn't have seen this kind of PDA in a royal portrait 20 years ago, it's definitely here to to say with Prince Harry and Duchess Meghan.
WATCH: Relive all the best moments from Prince Louis' christening. Post continues...

Duchess Catherine really is one besotted mum.
Did you notice that the new mother-of-three gazes at her son with an almost-identical expression of utter love in both her one-on-one portrait with him in the gardens of Clarence House and the Cambridge family photo?
Kate had a similar look of love earlier in the day when she stepped out with her sleeping son ahead of his christening at The Chapel Royal at St James's Palace in London.
Slide across to see Duchess Catherine's heartwarming looks of love! 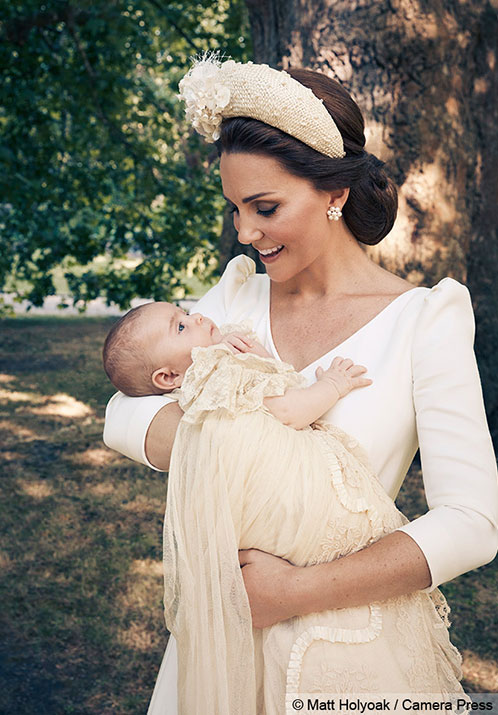 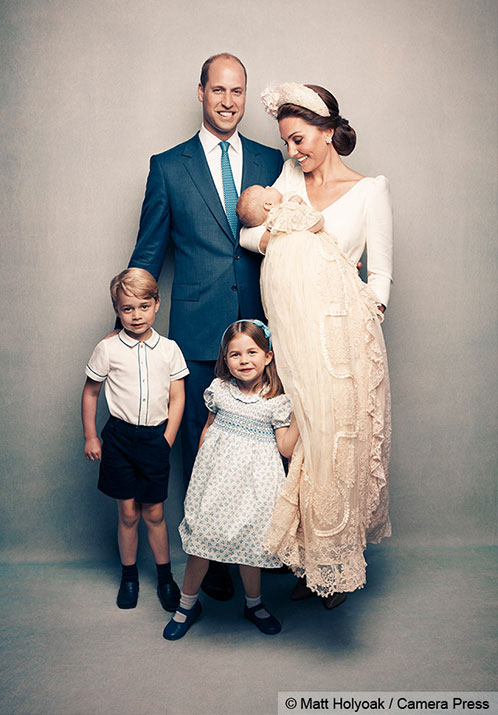 At three years old, Princess Charlotte has grown into the sweetest little girl.
In the portraits, Charlotte is never far from Kate's side and looks to be wanting to help out with her baby brother.
Whether she's nestling next to her mum and clasping Louis' hand in the Morning Room at Clarence House, or holding onto Louis' christening gown, Charlotte is Kate's shadow.

Queen Elizabeth may not have been able to attend the event due to a busy schedule but she still was there in spirit.
In fact, Her Majesty is overlooking her family thanks to the Michael Noakes' painting of her that's hanging on the wall of the Morning Room at Clarence House.
The other artwork that hangs next to it is called When Homer Nods: Portrait of George Bernard Shaw, by Augustus John.

5. Prince George is SO grown up

In case you were too busy cooing over baby Louis, you might have totally missed the gift that is Prince George.
While the four-year-old is pretty shy when he's out and about in public, when he's surrounded by his family we really get to see his joyful personality shine through.
Cheeky George, who turns five this month, steals the show as he sits on Prince William's lap and later, George shows off his big boy stance as he stands with his hand in his pocket.

6. How this photo makes history

Since his April birth, we're still yet to see all five members of the Cambridge clan pose for an official family photo - until now!
Royal christenings are the perfect excuse to rally the troops and get a new happy snap and this marks the first time Louis has posed with his older siblings, George and Charlotte, and proud parents, William and Kate.
Here's to many more special moments just like this.