Prince Louis' christening is finally here and the cherubic 11-week-old has grown up so much since we last saw him.
The royal family were out in full force as they came together at The Chapel Royal at St James's Palace in London for Prince Louis Arthur Charles of Cambridge's christening and initiation into the Church of England.
Can't get enough of the royals? Like our Facebook page Now To Love Royals for the latest news on your favourite royal family members!

Among the notable royal attendees were Louis' proud grandfather Prince Charles, his wife Duchess Camilla, uncle and aunt Prince Harry and Meghan Markle, and older siblings Prince George and Princess Charlotte.
The royal siblings were dressed in coordinating blue looks with Prince George wearing a short-sleeved shirt and his trademark navy shorts. While Charlotte looked cute in a baby blue sun dress with puffy sleeves, blue leather shoes and a blue headband.
In a heart-melting moment, we finally heard Princess Charlotte's sweet British accent for the first time. As the three-year-old was leaving the chapel, she could be overhead telling photographers "you're not coming", to which Kate replied: "How come?"
Kate's family were also in attendance with Carole Middleton, Michael Middleton, James Middleton and a pregnant Pippa Middleton stepping out for the event.
Sadly, Prince Louis' great-grandparents Queen Elizabeth, 92, and Prince Philip, 96, did not attend.
However it's believed the decision was made not because of health reasons but due to The Queen's hectic upcoming schedule.
The 92-year-old will travel back from Norfolk on Monday before stepping out at the centenary of the RAF on Tuesday, followed by a meeting with American president Donald Trump in Windsor on Friday.
The Queen was forced to cancel an appearance last week due to a "summer cold."
LISTEN BELOW: Hear Princess Charlotte's sweet voice for the very first time!
Since Prince Philip retired in May last year, he has undergone hip surgery and has been keeping a low profile.
According to The Express, The Queen decided not to attend some time ago and has the Cambridges' blessing.
Of course, all eyes were on the sleeping chubby-cheeked royal, who was carried into the baptism by his doting mother who looked stunning in a cream dress by her favourite designer, Alexander McQueen, and a dramatic fascinator by Jane Taylor.
The sleeping Prince looked peaceful and unaware of all the fuss carrying on around him as his beaming mother carried him into the service.
Kate was overhead calling her third child "very relaxed and peaceful," before confessing: "I hope he stays like this!"
Prince Louis' aunt the Duchess of Sussex dazzled in a khaki Ralph Lauren frock, matching dark green pumps and a Stephen Jones hat.
From the gown, to the water and even the day's date, today's celebrations are full of sacred royal traditions.
Prince Louis wore the same cream gown his older siblings donned for their christenings.
The new royal christening gown is a replica of the lace garment made for Queen Victoria's eldest daughter Victoria in 1841, which was worn at royal christenings up until 2008 but was replaced with an exact match as it became too fragile to wear.
The christening was carried out by the Archbishop of Canterbury, who is the most senior-ranking bishop in the Church of England.
For the service, the palace revealed Duke and Duchess of Cambridge "have chosen two hymns, two lessons and two anthems for the christening of their son, Prince Louis."
"The Hymns are O Jesus, I Have Promised and Lord of All Hopefulness.
After the baptism, the Duke and Duchess of Cambridge will host a private tea at Clarence House.
"Guests will be served slices of christening cake, which is a tier taken from The Duke and Duchess of Cambridge's wedding cake," the palace confirmed.
In the coming days, the royal family will release the official christening portraits which will be taken by photographer Matt Holyoak.

All the stories from Prince Louis' christening! Post continues after...

All royal babies are christened with holy water from the River Jordan in the Middle East by the sacred Lily Font bowl, which has been in the royal family and used in baptisms since 1841.
In a touching tribute to The Queen and Prince Philip, July 9th mark the anniversary of the Queen and Prince Philip's engagement in 1947, exactly 71 years earlier.
After fevered speculation, Kensington Palace announced the full line-up of Prince Louis' six godparents made up of Mr. Nicholas van Cutsem, Mr. Guy Pelly, Mr. Harry Aubrey-Fletcher, The Lady Laura Meade, Mrs. Robert Carter and Miss Lucy Middleton.
Since his April 23rd arrival, the fifth in line to the British throne has been bonding with his family at their 1A Kensington Palace apartment.
Remind you of someone? Prince Louis (first photo) seems to be the spitting image of sister Princess Charlotte (second photo) at the same age. Slide across to see the resemblance! 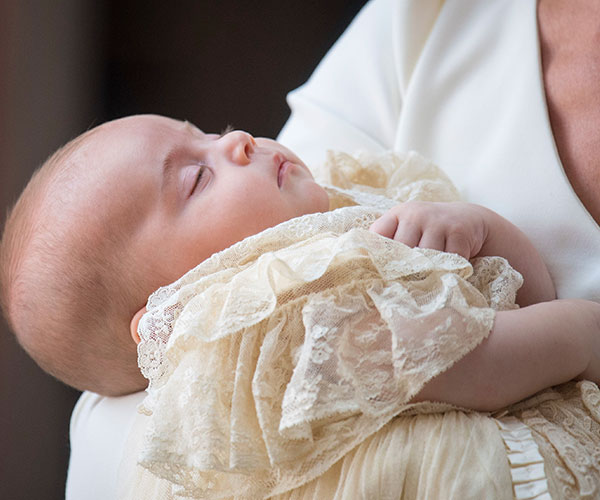 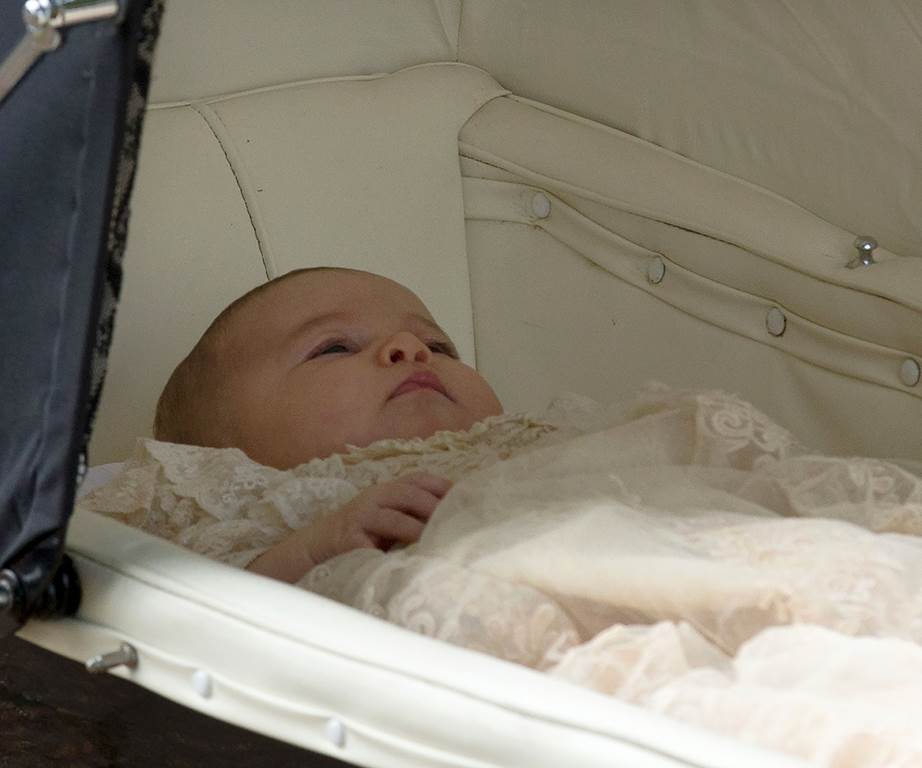 ← Slide →
While the newborn royal has been too young to attend recent events, including the Royal Wedding and Trooping the Colour parade, he was spotted in May with his mum, Duchess Catherine, and big sister Charlotte enjoying a walk around Kensington Gardens in London in his pram.
Meanwhile, following Prince Louis' latest outing royal watchers have pointed out just how much he looks like his older sister Princess Charlotte at the same age! With his bow lips, button nose and big eyes, it's easy to why the comparison has been made!
Prince William and Duchess Catherine introduced the world to their third child on the steps of St Mary's hospital shortly after his arrival.
And just a few weeks later in early May, the Cambridges released a beautiful set of new photos featuring Prince Louis and his big sister to celebrate Princess Charlotte's third birthday and to thank fans for their support following their son's birth.
A huge congratulations to Prince William and Duchess Catherine on Prince Louis' baptism!