We'll claim it now - your day is about to get approximately ten times better.
In a surprise move, the Royal Collection Trust has marked the 66th anniversary of the Queen's coronation with a throwback photo that has stopped us all in our tracks, shortly followed by unashamed laughter.
The picture shows a certain royal family member looking very bored, and suffice to say we're saving it to our collections ASAP.

In the photo, Charles is seen standing between his grandmother, the Queen's mother, and Princess Margaret.
While the two female royals look very concentrated, a young Charles couldn't look anything but - and it's a true sight to behold.
Accompanying the hilarious pic, the Trust wrote: "On this day in 1953 The Queen's coronation took place. This photograph shows a young Prince Charles standing between his grandmother (Queen Elizabeth The Queen Mother) and aunt (Princess Margaret)."
The picture has generated hundreds of comments and thousands of likes, with many finding Charles' expression rather comedic.
"Gotta love it. "My mom is being crowned Queen if the Monarch so I have to wear this scratchy shirt. When will this be over? I want to play kickball with the other kids!"," wrote one fan.
"Children will always be children. Lol. Young Prince Charles looks so 'over it'" another penned.
And many also took to the image for its striking similarity to one we saw within the royal fold not long ago - of none other than Charles' grandson Prince George!
Indeed the picture heavily resembles an image taken of the young Cambridge in 2017 as he attended the annual Trooping the Colour parade.
Swipe to see the hilarious similarities below! 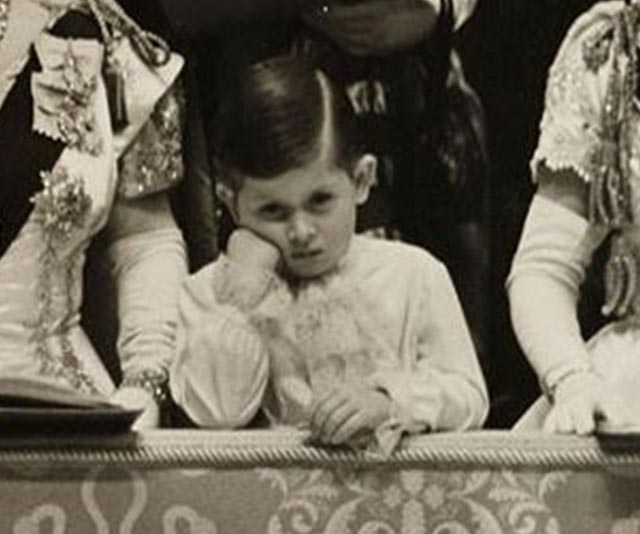 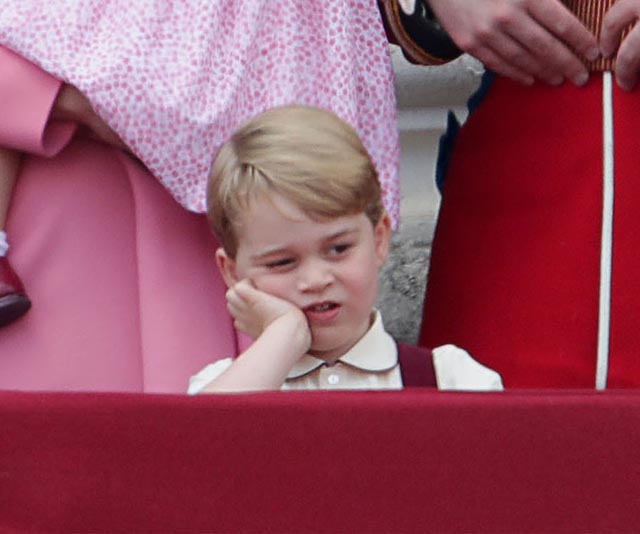 ← Slide →
According to People, Charles had a very good reason to appear a little, erm, un-animated.
The Coronation he was attending reportedly lasted three hours!
As for George's excuse? Well, perhaps he'd just had a late night re-watching The Lion King...
WATCH: Prince George and Princess Charlotte's adorable balcony antics at Trooping the Colour. Story continues after video...
With the annual parade coming up in June, now is a great time to be reminded of the royal spectacle that is Trooping the Colour.
Set to take place on Saturday, June 8, the event will be an exciting one for royal fans, as it is believed none other than Duchess Meghan will be in attendance.
The Duchess, who gave birth to her and Prince Harry's first son Archie Harrison in May, is currently on manternity leave, however, according to respected royal reporter Omid Scobie, it seems the Duchess will likely be in attendance.
"I hear that Meghan, provided everything is OK with the baby and herself, will be at Trooping," he told weekly royal podcast On Heir.
The exciting appearance would make sense given last year's Trooping the Colour was attended by Kate Middleton, who had only recently given birth to Prince Louis at the time.
We'll wait with baited breath to see if Meghan attends, but in the meantime, here's hoping there's a little more colour and animation to keep young George (and Charles!) content for the duration!
Stay tuned - we'll be bringing all the royal action from the display to you right here on Now To Love.
WATCH: Savannah Phillips teases Prince George at Trooping the Colour: