When Duchess Meghan made her grand return to the world stage at this year's Trooping the Colour, royal watchers rejoiced.
Accompanied by her husband Prince Harry, Duchess Catherine and Duchess Camilla, the Duchess of Sussex smiled and waved to onlookers from her carriage as it travelled down London's Mall to Buckingham Palace. One year on from her first Trooping, and things have certainly changed a lot.

Let's start with her outfit.
In 2018, the newly-married Meghan made her Trooping the Colour debut dressed in a stunning dusty pink Carolina Herrera dress and a hat by Philip Treacy with her doting husband Prince Harry by her side. However, her off-the-shoulder look received a fair bit of backlash from royal watchers.
"It was deemed by some people to be a bit revealing, but personally I couldn't see any harm in it," Joe Little, Majesty managing editor, told PEOPLE at the time.
But for her 2019 look, the Duchess of Sussex took a completely different turn with her outfit, opting for a more conservative, navy blue ensemble by her wedding dress designer Clare Waight Keller.
With those A-line wide sleeves and her hair pulled back into an elegant bun unlike her loose locks of 2018, one could almost say that it was a 180 from her first Trooping look.
And who can blame her? After copping all that criticism, no one would want to deal with that again especially weeks after giving birth.
Then there was the whole balcony experience itself.
The Duchess of Sussex was notably nervous at her first Trooping the Colour as anyone who's married into the royal family presumably would be. Between asking her husband if she could curtsy to the Queen and even admitting herself that she was nervous, it was clear that Duchess Meghan was a newcomer.
WATCH: Caring Prince Harry asking if Meghan Markle is OK at Trooping The Colour. Post continues after video...
Though they're not as high as Prince Charles and Prince William in the royal pecking order, Prince Harry and Duchess Meghan still had a pretty decent spot on the balcony in 2018 as well.
"[Meghan] was still in a good position," Joe Little, from Majesty magazine explained.
"She was central rather than the alternative of being in the front row and along the balcony to the left or right."
But with all the attention on Prince Louis, Duchess Meghan was well and truly in the background this year for the flypast and seemed happy to let the kiddies stand in front of her. On top of that, Meghan was absent for the Queen's entrance but royal experts think they know why.
Swipe across to see how different Meghan's balcony position is from last year. 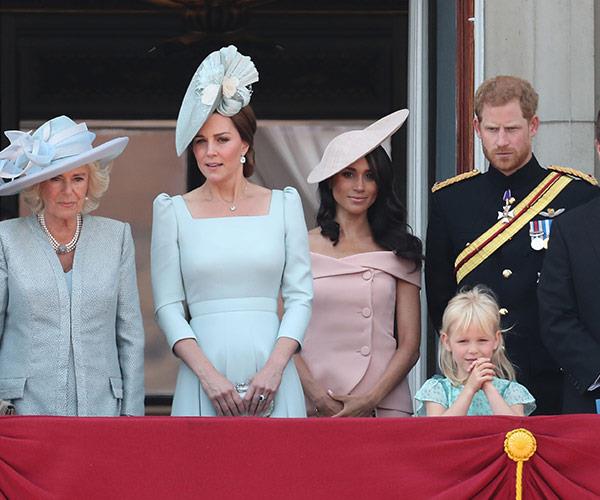 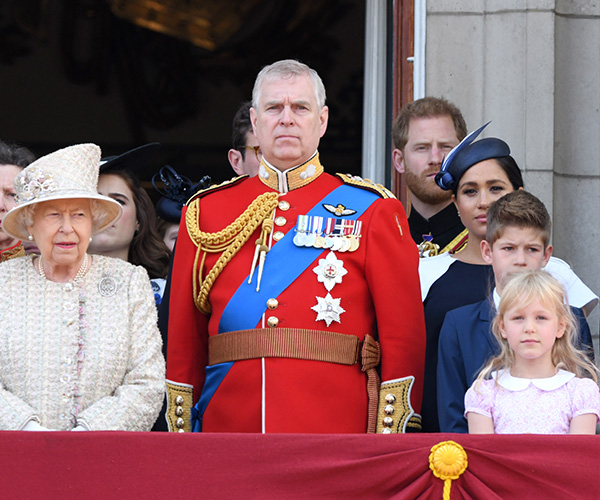 ← Slide →
Royal insiders suspect that the reason Duchess Meghan stepped away from the limelight was because of her new role as a hands-on mum to four-week old Archie and that she chose to attend Trooping the Colour as a family event as opposed to an official royal outing.
"The Duchess is still on maternity leave, but this is a family moment, with the wider members of the royal family all in attendance," a source told HELLO! "The Queen's birthday celebration is a family event."
For all we know, little Archie was tucked away in one of the many Buckingham Palace rooms and needed a feed and Meghan stood back in case she needed to dash out.
Royal watchers also noticed that Prince Harry wasn't his usual cheerful, cheeky self but royal expert, Russell Myers suspects the reason why is something all parents can relate to.
"Poor Harry, he wasn't looking too happy. I think lack of sleep I imagine," he said on UK morning show Lorraine.
"Doria has gone now, Meghan's mum, she has gone back to the US. They still haven't found a nanny so poor Harry, he's suffering from lack of sleep."
WATCH: Trooping the Colour, a history. Post continues after video...
Royal historian Victoria Howard believes Harry and Meghan will opt for a "non-traditional" nanny, possibly recommended by "Hollywood friends".
"I think they will look for someone who is obviously experienced, but that has more of a rounded attitude towards child rearing," she revealed.
"I think they will look for things that will make them aware of mental health perhaps, encouraging creativity and for them to be themselves."