The past week has been absolutely joyous for royal watchers around the world.
From the moment we were told Duchess Meghan and Prince Harry had welcomed a baby boy, the countdown was on for the baby's grand debut.

And on Wednesday, the new family-of-three finally made their first appearance together and it's fair to say it was everything we could have wished for and more.
From the way Prince Harry looked at his precious newborn son, Archie Harrison Mountbatten-Windsor (side note: we LOVE that they went with a totally unexpected, non-royal name), with total bliss and love, to Duchess Meghan's declaration that she has the "two best guys in the world" - there were so many warm-fuzzy moments to delight in.
But after going over their magical debut with a fine-tooth comb, this self-appointed sleuth of Sussex has noticed SO many heartwarming and down-right fascinating blink-and-you'll-miss it details.
Keep reading to find out all the best moments you completely missed the first time around because you were too busy swooning over Archie's cuteness!

These two are usually the epitome of cool, clam and collected.
But just like any new parents, Meghan and Harry were probably running on minimal sleep and had a very nervous energy about them.
And it's completely understandable - we'd be packing it in too if we had to front the entire world with our newborn just two day's after welcoming him.
Since joining the royal family, Meghan's past as an actress has come in handy when it comes to dealing with the media. While many of the American-born beauty's answers and sound bites often sound rehearsed, on Wednesday it was clear the mother was speaking off-the-cuff and from the heart. At times, her voice even shaking just a little.
Usually it's Meghan who takes charge during interviews with Harry but on Wednesday, it was a role reversal with the Duke of Sussex steering the ship, which makes us love her even more!
It was a completely relatable and unfiltered display.
READ NEXT: Mums praised Duchess Meghan for proudly showing off her gorgeous post-partum figure

She's only been a mother for 48 hours but it seems the 37-year-old was destined for this role.
Did you catch the adorable moment she stoked Archie's cheek lovingly?
Proud dad Harry was holding Archie during the first photo call but when the bub was introduced to The Queen and Prince Philip, it was Meghan was cradled her bundle and it's fair to say we've never seen anything more heartwarming.
Like we said, she's a total natural.
WATCH: The sweet moment Duchess Meghan strokes baby Archie. Post continues after the video...

Prince Harry and Meghan Markle are the ultimate team and according to lip reader Tina Lannin, doting husband Harry had his wife's back throughout their photo call.
Lannin told The Sun Harry politely told Meghan to "turn around" to face the cameras before looking at his sleeping son and gushing, "he's so quiet."
As the trio made their way into the grand hall of Windsor Castle, Harry whispered to his wife and said "here we go" before flashing a huge smile at her.
Harry then looked down at his bub and told him he was just "wonderful."
If you need us, we'll be over here in the corner quietly sobbing over how pure and perfect Harry truly is.

We didn't really get the best look at Archie

Perhaps it was a clever strategy or maybe they had way more important things on their mind, you know like, keeping a baby alive, but for whatever reason, little Archie was bundled up in a fluffy white blanket and beanie, obscuring the cameras from getting a proper look at his precious face.
At one point, the journalist politely asked Harry to show Archie's face off and then the world was gifted a fleeting glimpse of the divine little baby.

Less than two years ago in November 2017, Meghan and Harry made their first appearance as an engaged couple on the grounds of the Sunken Gardens in Kensington Palace.
Cut to May 2019 and they're now parents, just as in love and affectionate than ever.
Looking at this comparison of the two milestone moments is like something out of a fairytale ... 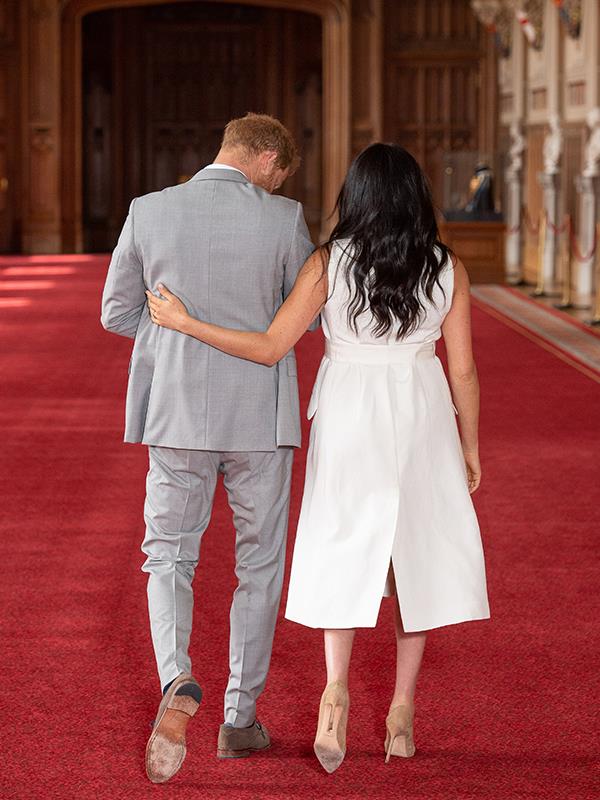 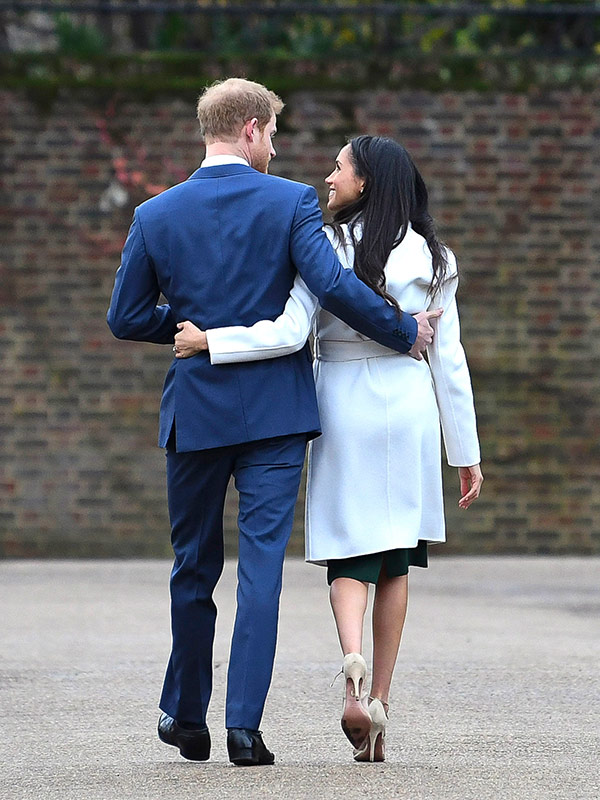