Meghan Markle stepped out for the Commonwealth Day church service at Westminster Abbey on Monday -- one of royal family's most formal events of the year.
The former actress arrived on the arm of her husband-to-be Prince Harry, looking typically put-together in a cream tailored by Amanda Wakeley and a matching beret by Stephen Jones. She accented the subdued ensemble with dark navy suede pumps and a mini navy leather bag.
And it wasn't hard to see where she pulled her inspiration for the polished look!

The Duchess of Cambridge -- who was also in attendance, alongside her husband Prince William -- opted for top-to-toe navy in a dress and coat by Beulah London, a Lock & Co hat and the very same pair of suede court shoes.
Many avid royal watchers thought Kate and Meghan wore identical navy pumps, but after some sleuthing it turns out the LA native donned a pair of Manolo Blahniks, while the pregnant mum rocked her trusty old favourites - the Celeste heels by Jimmy Choo.
Kate, who is expecting her third little prince or princess in just a matter of weeks, let her future sister-in-law shine during the proceedings as she took to the altar to sing the national anthem. 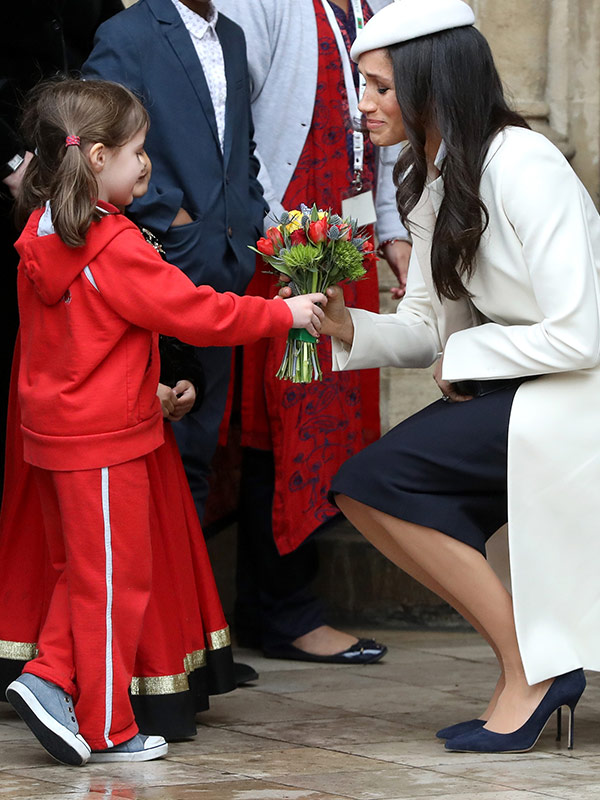 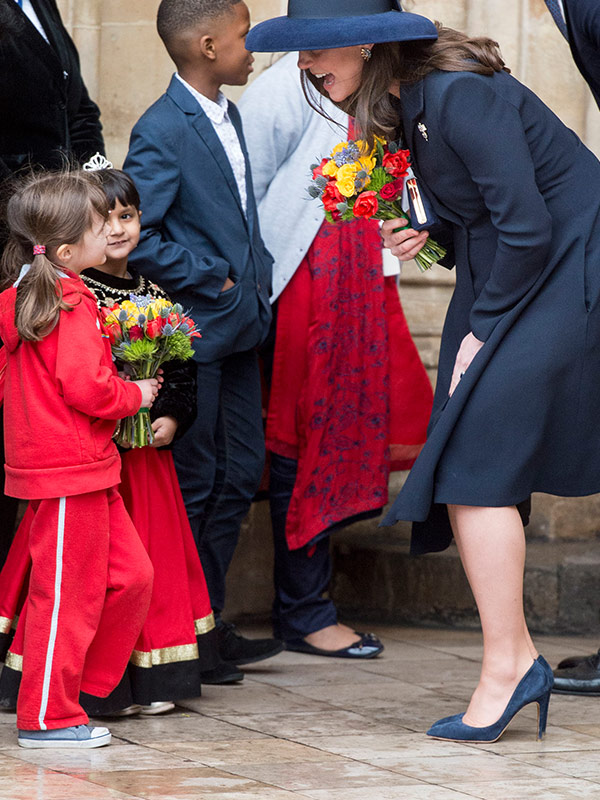 The royal-to-be was also spotted nodding along to musical performances, including an upbeat number from former One Direction band member Liam Payne.
Her future husband was less enthusiastic by Liam's rendition of John Mayer's Waiting On the World to Change.
Harry was spotted raising his eyebrows, which left his partner in a fit of giggles.
Watch the adorable moment in the video player above!
Meghan, Harry, Kate and William -- a.k.a the awesome foursome -- joined the Queen, Prince Charles and the Duchess of Cornwall for the church service. Prince Andrew, Princess Anne and the Countess of Wessex also made up the royal party.
Following the event, the young royals spent some time with those who gathered from far and wide to catch a glimpse of their outing.
The 36-year-old is stepping into the role of the people's princess with ease.
Talking to David Swindells, she told him, "The service was beautiful, especially the choir and the music."
Charmed by their conversation, the teacher admitted, "She was very personable. I think she'll be a great addition."
Harry's future wife also eagerly chatted to pupils from the local school.
She was overheard telling them, "Hi, I'm Meghan," before gushing, "So sweet!"
One attendee, Ms Hartley, shared a snippet of their moment together.
"She was saying what a lovely service it had been and her first service at Westminster Abbey. We congratulated her on her engagement."
"She was delighted and said she was 'very, very excited' about her wedding."
Ms Hartley added, "She stayed chatting with us for quite a while - what a lovely, lovely lady."
Before Meghan's big day - take a look at the tiaras she could wear for her royal nuptials!
The British Royal Family then attended a private reception for those involved in the event.
Meghan's attendance at the annual celebration is unprecedented given that she hasn't yet joined the royal family -- officially, that is. Her wedding to Prince Harry will take play on May 19 in St. George's Chapel at Windsor Castle.
As Kensington Palace recently announced, following the ceremony, the newlyweds will undertake a tour of the town as their first trip as man and wife to greet well-wishers from all over the world who have come to see them.
It will no doubt remind fans of similar scenes that played out during Prince William and Duchess Catherine's 2011 wedding.
WATCH: Relive the magic from Prince William and Duchess Catherine's wedding day.
There's also speculation the 36-year-old might be walked down the aisle by none other than Prince William.
According to The Sun, Prince Harry's big brother may step up for the important moment as Meghan's two closest male relatives may not be at the royal wedding.
Not long to go now!