When the former Meghan Markle and Prince Harry announced their engagement in November 2017, all eyes were on the incredible sparkler that Harry had gifted his fiancee.
And now, one-and-a-half years later, the Duchess of Sussex has redesigned the ring, which features two diamonds once owned by the late Princess Diana.

After the birth of Archie Mountbatten-Windsor on May 6, Meghan stepped out for the very first time at this year's Trooping the Colour.
Accompanied by her husband, Duchess Catherine and Duchess Camilla, the Duchess of Sussex smiled and waved to onlookers from her carriage as it travelled down London's Mall to Buckingham Palace.
And while we couldn't take our eyes off the new mum, some eagle-eyed fans noticed that her engagement ring had had some alterations.
In fact, the difference was so distinct, we're surprised we didn't notice before!
READ NEXT: Is this the intriguing reason why Meghan and Harry are choosing to hide Archie's face?
The iconic gold band, which held the three sparkly stones, has now been replaced with a delicate diamond-studded band and according to Rings Daily, the ring appeared to be "reset".
"It now features a thin micro-pavé band, as opposed to the original solid yellow gold one Harry proposed with," they said on Twitter.
"It's difficult to tell if the diamonds were altered as well."
See the difference in the image revealer below! 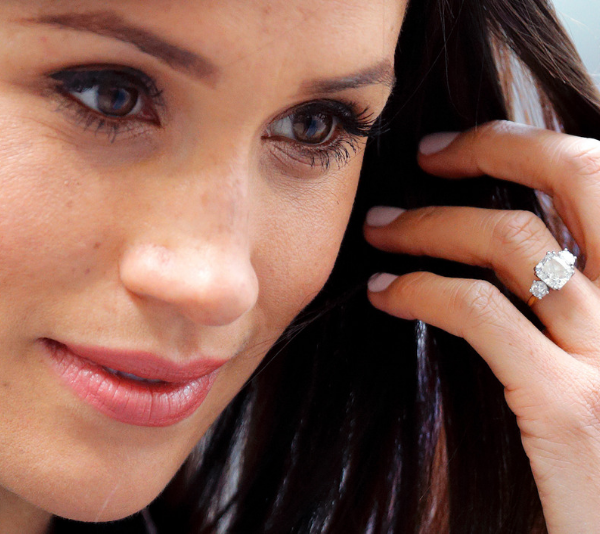 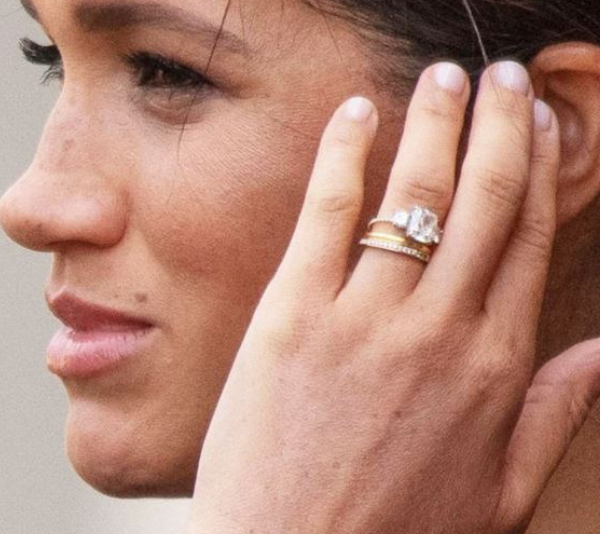 ← Slide →
During the couple's first sit-down interview upon their engagement, Harry spoke about why he chose the ring for his then future-wife.
"The ring is obviously yellow gold because that's [Meghan's] favourite and the main stone itself I sourced from Botswana and the little diamonds either side are from my mother's jewellery collection, to make sure that she's with us on this crazy journey together," he said.
Duchess Meghan chose not to wear her engagement ring during her final months of pregnancy (most likely due to swelling), but it is unclear why she chose to change it.
During Trooping the Colour, Meghan also debuted a brand new sparkler, which sat next to her wedding ring.
In a report from People, it was revealed that the ring was in fact, an anniversary gift from Prince Harry.
The ring, known as an eternity ring, is usually covered in diamonds with an infinity loop, much like the one Meghan wore.
Many believed the ring might have been a push present from Prince Harry following the birth of their newborn son, as Kate Middleton received something similar from Prince William as a gift when she welcomed their first child, Prince George.
WATCH NEXT: Duchess Catherine and Duchess Meghan share a laugh at Trooping the Colour 2019! Post continues after video...
And new bling wasn't the only thing the royal ladies had in common during the exciting outing.
Many were thrilled to see the pair arrive at Trooping the Colour together - with both Meghan and Kate sharing an animated conversation as they entered via horse-drawn carriage.
At one point, the pair are seen roaring with laughter together - an important and exciting sighting that's suggested those feud rumours can finally be put to bed.