Motherhood certainly suits Duchess Meghan!
The brand-new mum was positively glowing as she and Prince Harry stepped out in their showstopping debut as a family of three on Wednesday, May 8th.

In her new family's adorable first photo call together, the Duchess wore a stunning white sleeveless tuxedo midi dress, reportedly created by British designer Grace Wales Bonner.
The designer, who is renowned for her menswear creations, has a British mother and Jamaican father, and is also a lecturer at legendary fashion schools Central St Martins and the Parsons School of Design in NYC.
Meghan's outfit of choice had some stunning details, including gold buttons and a bow. On her feet, the Duchess wore nude pumps by Manolo Blahnik.
She accessorised her look with a simple Jen Meyer turquoise necklace.
Wearing her hair in loose curls, a beaming Meghan opted for minimal makeup as she debuted her little one to the world.
READ MORE: Baby Sussex's dazzling debut: Duchess Meghan and Prince Harry introduce their new royal baby to the world
And in a moment revered by fans the world over, Meghan also had a fitting twinning moment with her late mother-in-law Princess Diana, who also wore a white button up tuxedo-style midi dress back in 1987 while at Clarence House.
While Diana's style has long sleeves and navy blue lapels, it's clear these two have the same eye when it comes to fashion!
See Meghan's twinning moment with the people's princess below! 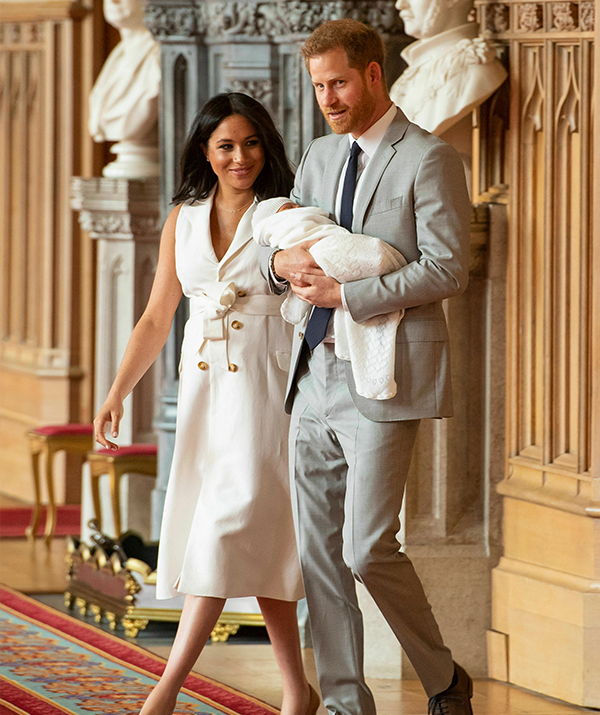 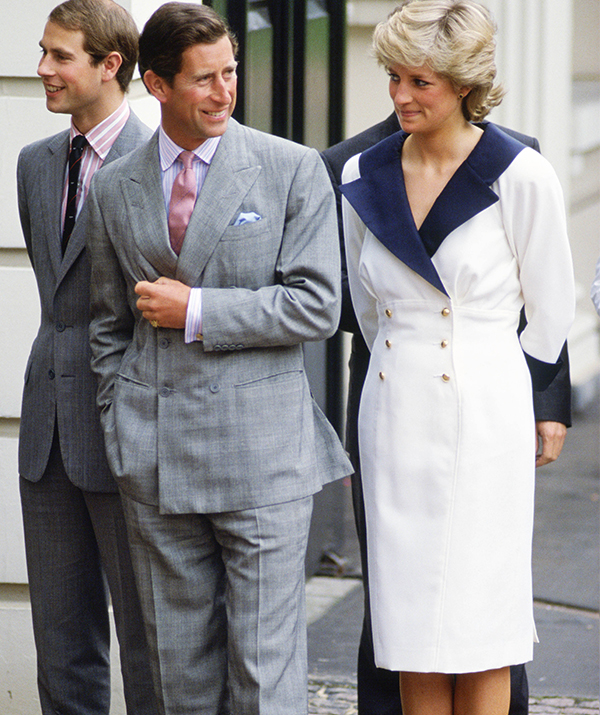 ← Slide →
The Duchess and Prince Harry welcomed their adorable baby boy on Monday, May 6.
The pair announced the arrival via an Instagram post to their newly launched @SussexRoyal account, writing: "The Duchess and baby are both healthy and well, and the couple thank members of the public for their shared excitement and support during this very special time in their lives."
WATCH: Prince Harry excitedly announces the arrival of his son. Story continues after video...
Throughout Meghan's pregnancy, she was revered for her enviable outfit choices, with the stylish royal donning a slew of designer threads that sent fans wild - and the said designer's websites to crash!
Indeed, Meghan has single-handedly been the reason a number of brands have stayed afloat due to her fashion-fanatic following jumping on every outfit she wears.
In fact, the phenomenon known as the "Meghan Effect" has even crashed two Australian designers websites while she was visiting on a Royal Tour shortly after announcing her pregnancy in 2018.
Karen Gee and Dion Lee both saw their websites overwhelmed with customers after the Duchess stepped out wearing their designs - so we can only imagine Markle's gorgeous ensemble from today will follow suit.
Over her pregnancy, Meghan kept things simple, yet stylish, opting for blazers, maxi-dresses, and some stunning coats (it was the UK winter, after all!).
Among her most iconic looks was her Oscar de la Renta gown worn to the National Geographic Awards in Sydney, as well as a showstopping custom Dior creation worn in Morocco during her third trimester.
Now, we can look forward to seeing the style-queen (and her brand new baby!) continue to nail the fashion-stakes.