Prince William and Duchess Catherine might have been dressed to the nines last week when they attended the Queen's state banquet, but this week, they've toned things down a touch.
The pair donned gear that could only be described as the closest thing to 'activewear' for a royal, with Kate wearing a turtleneck black jumper and black skinny jeans paired with a checked blazer as she joined in fun sporting activities with people from an organisation with a positive cause.
The event was held with the Coach Core Essex program, which teaches sport coaching to young unemployed people to help them build their careers.
Wills made like Kate and wore a casual blue jumper and chinos as he also took to the court, joining children playing tennis, foam arrow throwing and other athletic activities.
READ: Duchess Catherine's best tiara moments of all time
The couple shared some sweet moments with children as the event progressed - at one point a young girl couldn't help herself when she threw her arms around Kate for a warm embrace while they chatted.
Duchess Catherine's practical ensemble could also suggest a preferred fashion trend in the royal circle. Duchess Meghan sported a similar look earlier this month while visiting Dubbo in Australia.
Swipe to see the similarities below! 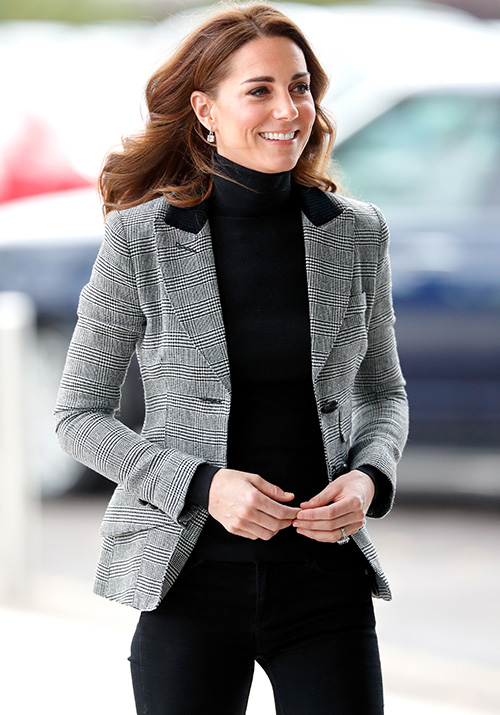 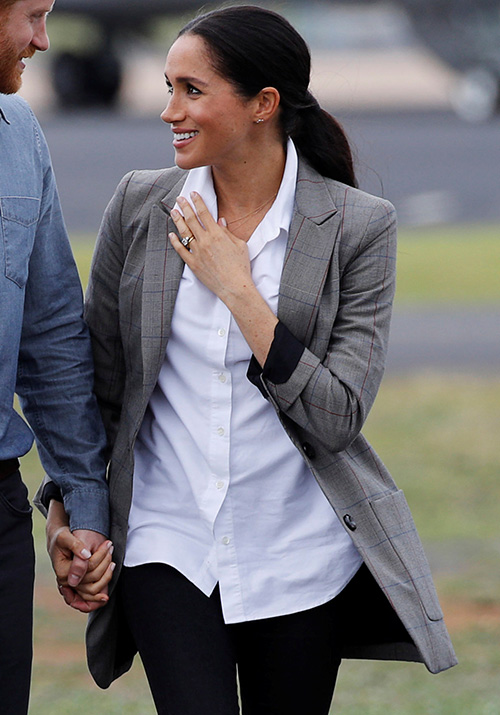 ← Slide →
Coach Core is an organisation close to the royals hearts, with Prince Harry and Duchess Meghan also attending an awards event for the charity in September.
Kate, Wills and Harry also previously attended a Coach Core graduation ceremony in 2017.
READ: Prince Harry and Duchess Meghan have a ball of a time at sports award ceremony
It seems the royal parents of three are a far cry from their glitzy State Banquet event last week, where Kate stepped out in diamonds and silk taffeta.
And while Kate's stunning Cambridge Lover's Knot pearl and diamond tiara caught the attention of many, there was another accessory that got people talking - the Royal Family Order of Queen Elizabeth II brooch.
The Duchess was given the honour afforded only to select female members of the Royal Family by the Queen, wearing it pinned to her left shoulder of her pale blue Alexander McQueen ballgown.
In a sweet gesture, the brooch is unique in that is is made out of glass instead of the usual ivory according to Majesty magazine, which is believed to be a touching nod to William's passionate conservation efforts.
WATCH: Duchess Catherine's best hair moments through the years: