It can be hard enough for us normal folk to choose a single top to wear on any given day, but as for Duchess Catherine? Well, let's just say she's on quite a different level.
The stunning royal stepped out in two stunning outfits on Tuesday March 12, with both looks setting the internet awash as fashion fanatics revelled in her flawless style.
Starting with a daytime engagement in London, Kate visited the Henry Fawcett Children's Centre wearing a bright purple top by Gucci paired with wide-legged trousers by Jigsaw.
The Duchess looked chic with her hair in signature loose waves while she carried a Aspinal lilac bag.
Her decision to wear pants might well have been a strategic one for what came next, as the royal got well into the day's activities with a number of young children.
During the event, Kate revealed a super sweet anecdote about Prince Louis, telling one of the mums, "Louis just wants to pull himself up all the time... He has got these little walkers and is bombing around in them."
The engagement wasn't short of sweet moments for the mum of three, who only recently commented on whether she'd have more children at another official engagement.
While chatting to a dad and his five-month-old baby, Kate was heard saying: "He's a very sweet little boy... He's so diddy. Makes me very broody."
She was then asked by the father if she was planning for baby number, to which Kate laughed and joked: "I think William might be slightly worried."
WATCH: Kate Middleton plays with young kids on visit to a children's centre. Story continues after video...
Shortly after her clucky visit to the children's centre, Kate transformed her look entirely for a glitzy night out at the NPG Portrait Gala.
Stepping out in a divine Alexander McQueen gown with floral detailing, the royal immediately made heads turn.
Kate again wore her enviable locks out, accessorising the dress with simple heels, drop earrings and a black clutch.
And there was one big question on the minds of many who are familiar with Kate's penchant for recycling her outfits - where have we seen this one before?
READ MORE: Princess Beatrice just made a dazzling first appearance with her boyfriend Edoardo Mapelli Mozzi at the Portrait Gala
The answer isn't as straightforward as you'd think, because while we definitely have seen the stunning gown before, it hasn't been in the same way.
Kate wore her McQueen frock to the 2017 BAFTA Awards, only this time around, the custom dress had sleeves added.
Swipe to see the two looks below! 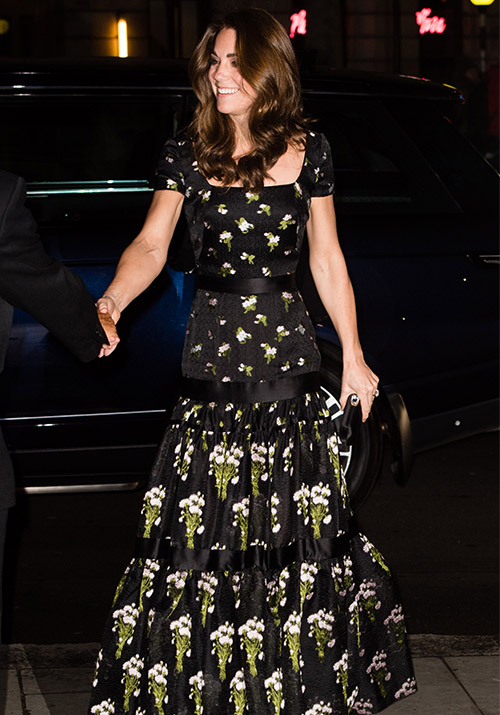 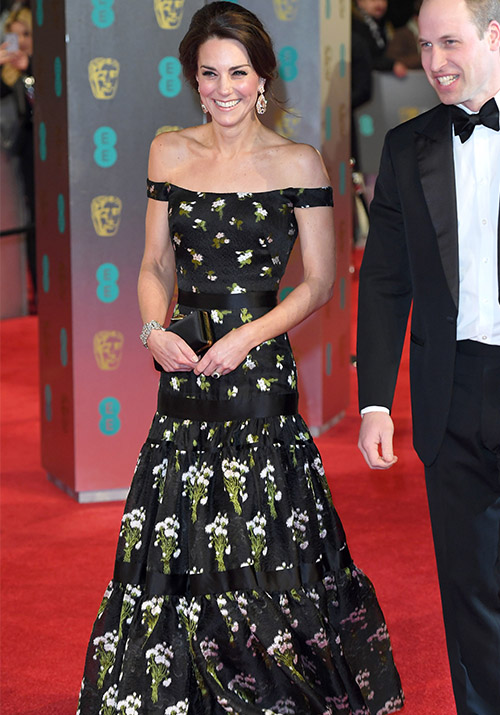 ← Slide →
Kate was joined by a plethora of celebrities at the glamorous gala event, including Princess Beatrice, Kate Moss and David and Victoria Beckham.
Being the third Portrait Gala she's attended, the royal will be well equipped for the evening's festivities. She will meet with various members of the Gallery's Youth Forum while viewing artworks by their outreach programmes.
Kate is also a patron of the Portrait Gallery, where she also had her own portrait on display for the Vogue 100: A Century of Style exhibition.