Duchess Catherine, it's time to dust off your favourite badge because we have a royal baby on board!
That's right, last year Kensington Palace announced that the Prince William's wife is pregnant with her third child.
In a statement released at the time, the palace said that Kate was experiencing severe morning sickness and will be missing out on her latest engagement as a result.
"The Duke and Duchess of Cambridge are very pleased to announce that The Duchess of Cambridge is expecting their third child," the palace said.
One things certain - over the next seven months we'll be treated to some stunning maternity fashion.
In the lead up, we look back at Catherine's stellar pregnancy style.

Where it all began 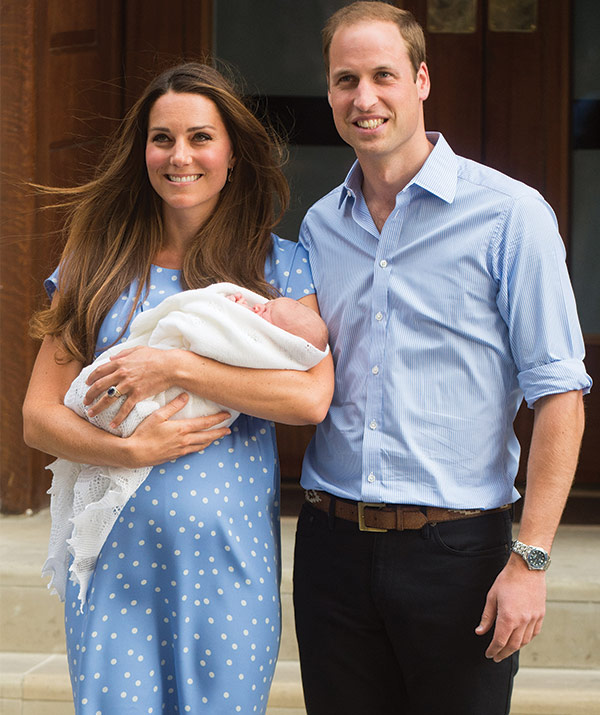 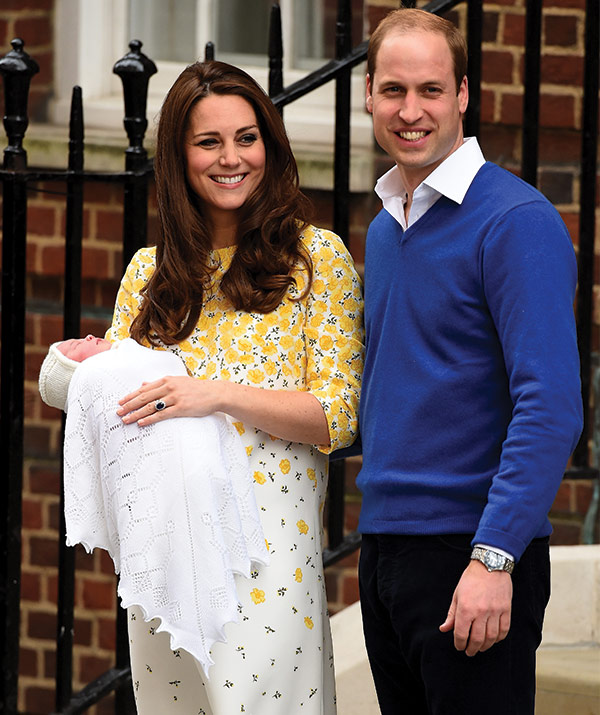 ← Slide →
The world will forever treasure the first snaps outside Lido Wing where Kate and William presented to the world their bundles of joy.
In 2013, we met Prince George on July 23rd, 2013.
And then two years later on May 2nd 2015, we were introduced to Princess Charlotte.
On both occasions, the new mum opted to custom-made Jenny Packham designs.

How could anyone ever forget when the news first broke that the Duke and Duchess were expecting an heir to the throne.
After the palace shared the news back in 2012, we saw the very first snaps of a pregnant Kate leaving the hospital following a bout of severe morning sickness in December with William.
Despite being under the weather, Kate looked gorgeous as she held onto a bright bunch of yellow flowers.
Ever since, we've seen countless snaps of the royal holding floral arrangements, usually a gift from well-wishers.

One of her most memorable looks has to be her bright pink Mulberry coat, which she wore two months before the birth of Charlotte at her final royal engagement where she visited the Stephen Lawrence Centre in Deptford.
But always the frugal fashionista, we actually first saw Kate in the hot pink number in the earlier stages of her pregnancy back in September 2014 during her trip to New York. 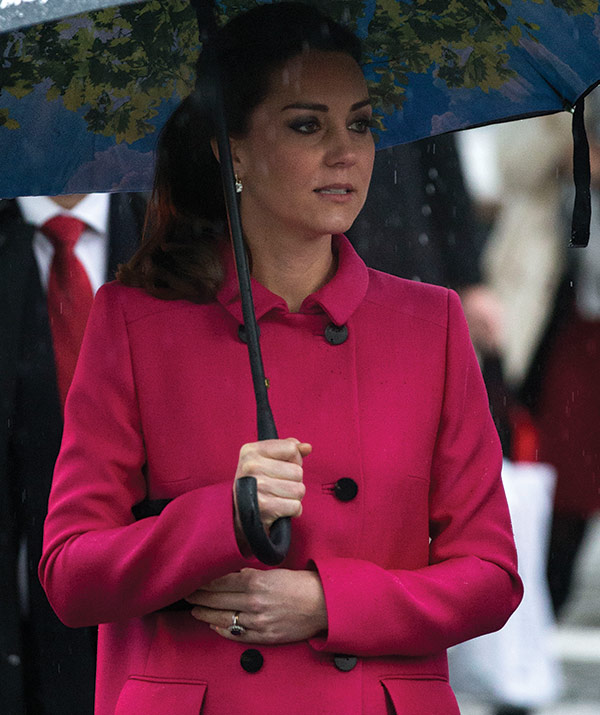 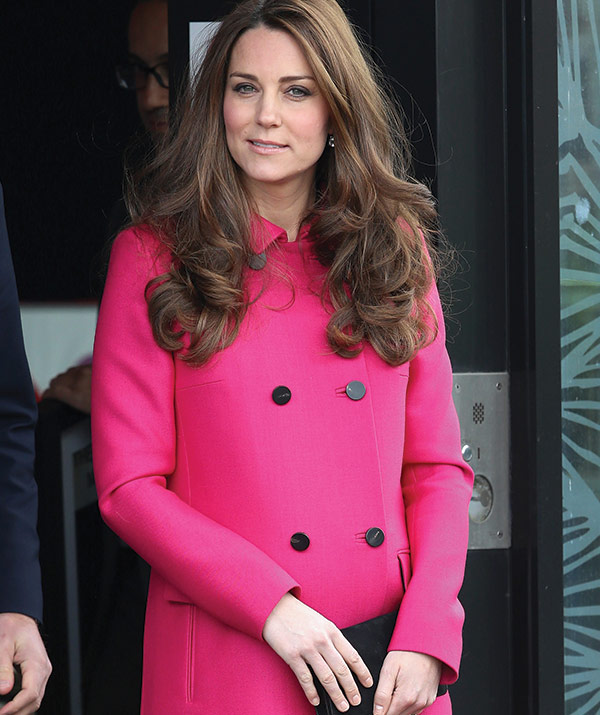 ← Slide →
And pink proved to be a popular hue for the mum.
At Trooping the Colour, in 2013 - just weeks before we met George - Kate donned this pale pink Alexander McQueen coat.
Two years later she whipped it out for an engagement at Westminster Abbey.

The royals ADORE St Patrick's Day.
In March 2012, Kate handed out shamrocks to the Irish Guards in an emerald Emilia Wickstead coat.
One year later she wore the same coat - with one key difference... A baby bump! 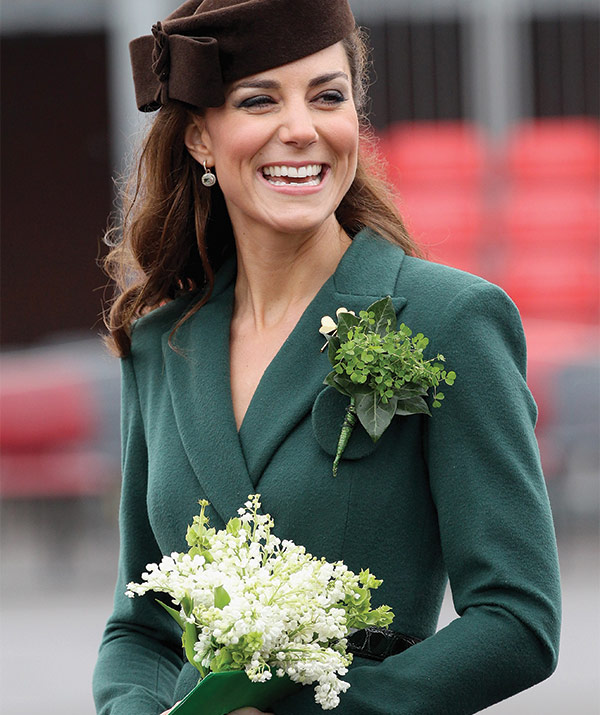 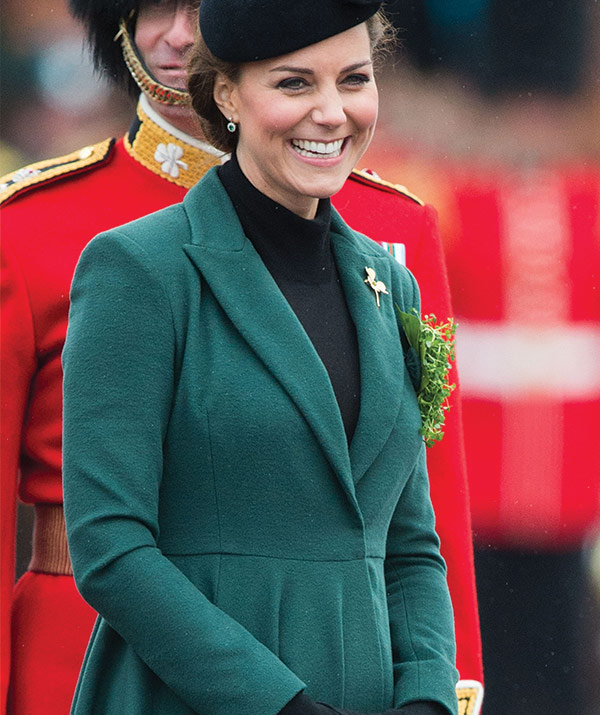 Kate loves polka dots!
A trusty favourite for Catherine during her first pregnancy was her white, floaty Topshop dress with big black polka dots. Royal well-wishers will remember she rocked the outfit to a friend's wedding and her famous visit to the Warner Bros studios in April, 2013.
In line with her love of high-street fashion, two years later she flipped it and reversed it with black dress with white dots from Asos... And it only cost her £35 [about $56].
Keeping with the spotty theme, Kate donned a Dalmatian print Hobbs coat during both of her pregnancies. 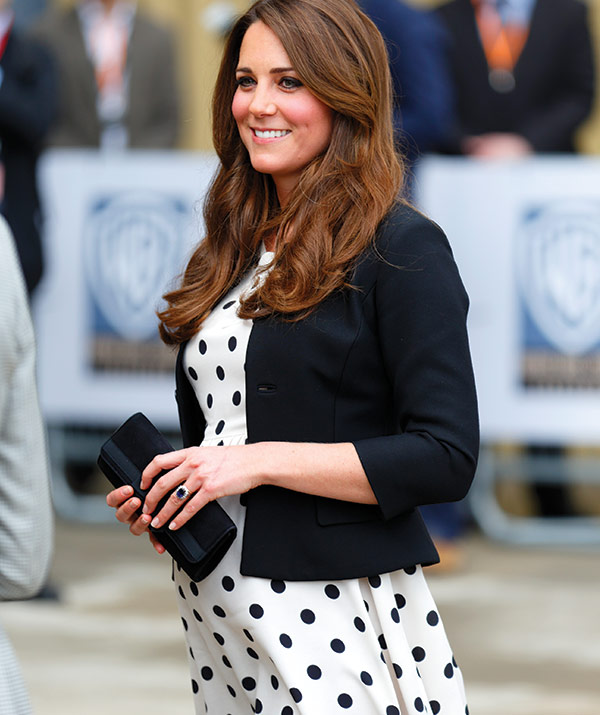 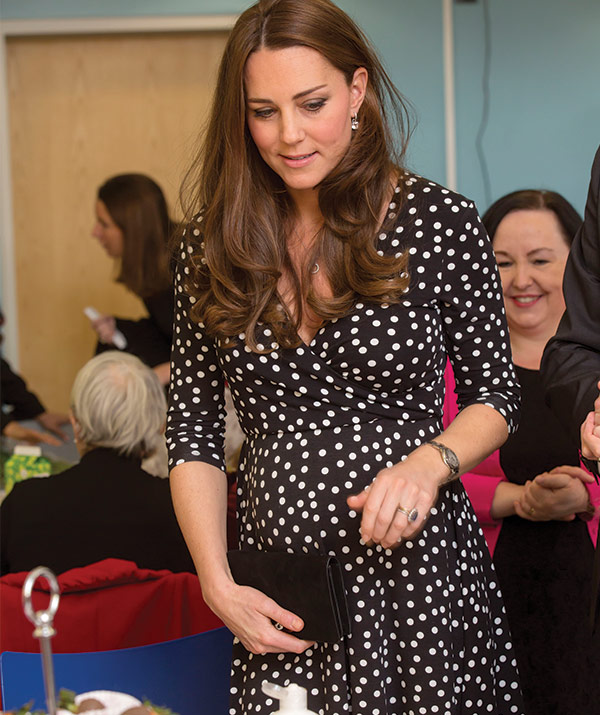 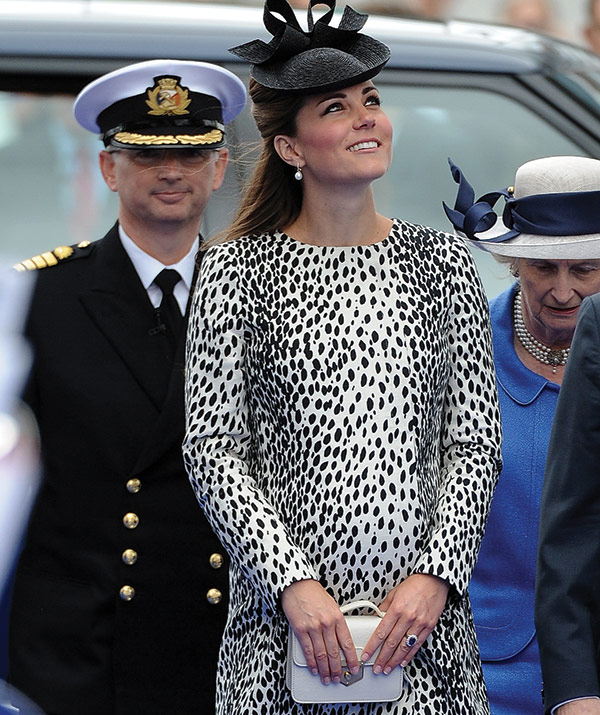 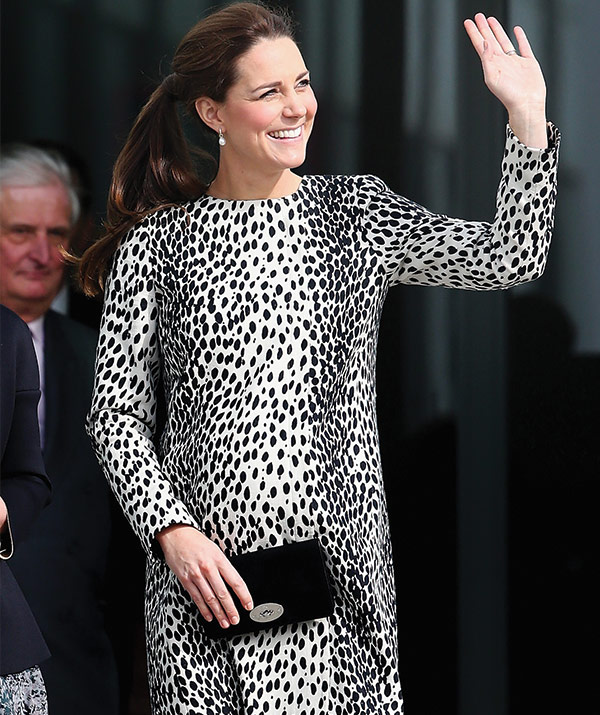 What Catherine has worn during pregnancy numero tres

According to our maths, the Duchess would currently be about 12 weeks pregnant.
This means we've already seen Kate on numerous occasions sporting fabulous maternity fashion.
The expectant mother wowed at the royal Spanish state banquet, where the 35-year-old dazzled in her fashion-forward bespoke Marchesa gown.
You can check it out in the video below!
She also sported new locks at Wimbledon this year, a subtle nod to her impending arrival, which is very on point with her previous pregnancies.
And who could forget all of her glamorous looks during the royal tour of Germany and Poland.
During the visit she actually said to William, "We will just have to have more babies!"
Little did we know...
The Duchess of Cambridge made her highly-anticipated return to public life since the announcement of her third pregnancy alongside husband Prince William, attending an event at Buckingham Palace in honour of World Mental Health day.
The 35-year-old, showed off a hint of a baby bump in a powder blue lace dress designed by London-based brand Temperley.
In September last year, the Duchess danced with beloved children's character Paddington Bear while visiting the cast and crew from the upcoming film Paddington 2. The cheerful royal twirled in a blush pink, knee-length dress by Irish fashion designer Orla Kiely.
The frock featured a black waist strap, which accentuated her growing baby bump, and was accented with a black clutch bag and block heels.
Now, just two weeks after celebrating her 36th birthday on January 9, Duchess Catherine stepped out for a handful of royal engagements, starting with a visit to The Maurice Wohl Clinical Neuroscience Institute, at the Institute of Psychiatry, Psychology & Neuroscience (IoPPN) at Kings College.
And it was on this occasion, in particular, that Catherine once again showed us that she has one of the most enviable coat-drobes we ever did see.
Obsessed with the royals? Join our Facebook group for the latest updates on Princess Diana, Prince Harry, Kate Middleton, Prince William, and all things royal!