When it comes to the British Royal Family, there's certain things we know for sure.
Like the fact that Prince George has the cutest back catalogue of expressions that could melt even the coldest of hearts.
Or, as The Queen recently revealed, that Princess Charlotte is "the boss" around the palace and not even her big brother, aka the future King of England, is exempt from her rule!
But when it comes to their third sibling, who is due to be welcomed by proud parents Duchess Catherine and Prince William in April, there's a certain element of mystery.
As we count down to the arrival of the third Royal Baby, we answer all your burning questions! From when the royal baby is due, what the royal baby's name is most likely to be, where Kate Middleton will give birth, what is the royal baby's gender, to the more outlandish reports like is Kate Middleton is pregnant with twins?!
BREAKING: Kate Middleton is in labour with her third child! Read more here.

When will Kate Middleton go on maternity leave?

As she enters her final trimester, Kate's schedule is still as busy as ever. From her recent whirlwind tour of Sweden and Norway, to fronting the Royal Foundation Forum in London – Kate the Great is unstoppable!
But when will she step away from the spotlight? With Prince George and Princess Charlotte, Catherine commenced her maternity leave about a month out from her due date.
The mum-of-three to-be has recently made two solo engagements – an appearance to Pegasus Primary School in Oxford on March 6th and the opening of the children's charity Place2Be's new HQ the day after.
BREAKING: Duchess Catherine welcomes a son! Read more here.
It's believed Kate's final public appearance will be on Commonwealth Day as she joins key members of the Royal Family at Westminster Abbey on March 12th.
She'll most likely re-emerge in an official capacity at Prince Harry and Meghan Markle's wedding at Windsor Castle on May 19th.
Kate will be on hand to help with Prince George and Princess Charlotte, who will have starring roles in the ceremony, however the newborn will most likely be left at home with granny, Carole Middleton, or super-nanny Maria Borrallo.

When is the royal baby due?

Prince William and Duchess Catherine have stayed pretty tight-lipped on the details surrounding their third child, other than confirming the new prince or princess is due sometime in April.
But according to a fresh report by UK paper The Sun, Duchess Catherine's due date could fall on a very patriotic holiday.
The publication claims the royal couple will welcome their bundle of joy "on or around" St George's Day on Monday, April 23rd.
St George's Day is celebrated by Christian denominations around the world and honours the Feast of Saint George.
WATCH: Relive Princess Charlotte's debut back in 2015! Post continues...
"There's no certainty with due dates of course but the Duchess is working off a date around St George's Day and it would be a lovely patriotic coincidence if he or she were born then," an insider explained.
However, many royal watchers have pointed out that if Kate is indeed due around April 23rd it won't give her much time to recover for Meghan Markle and Prince Harry's wedding just three weeks later.
After her May 2nd birth with Princess Charlotte in 2015, Catherine made her first public appearance six weeks later at the annual Trooping the Colour parade.
Perhaps the easiest way to figure out her true due date it to take note of when she taps out of the spotlight - and then add on a month!

What is the royal baby's name most likely to be?

If it's a girl, the bookies have Princess Mary as the top pick with the odds at 7-1. Following behind Mary are Alice and Victoria with 8-1 odds, while Alexandra is at 16-1.
As for the boys' picks, the bookies have Albert and Arthur tied in the top spot at 12-1.
If there's one thing we know for sure is that Wills and Kate will most definitely opt for a classic choice, drenched in history that compliments George and Charlotte.

Where will Kate Middleton give birth?

It's believed Duchess Catherine will welcome her new addition at the Lindo Wing of St Mary's Hospital in London, just like she did with her two other babies.
The private wing of the hospital provides all the security and comfort the Duchess will need.
The NHS facility charges £5,215 ($AUD 9, 285) for the first day if the child if born naturally.
If they're delivered via a Caesarean, it's £6,745 ($AUD 12, 010). If patients upgrade to the deluxe package, it's an added £1,155 ($AUD 2, 056) per day.
Once Catherine goes into labour, Kensington Palace will release a statement confirming which hospital she'll be heading to.

What is the royal baby’s gender?

If you believe in subliminal signals, royal watchers are convinced Kate is expecting a second son after stepping out in several blue outfits in recent weeks.
The 36-year-old's ensembles have caused such a stir that even the bookies have changed their tact. Just weeks ago, they were convinced she was expecting a little girl but they've now updated it to a boy.
With their past two children, William and Kate haven't officially announced the genders of George and Charlotte until after the birth. So we're guessing we won't know if we have a new prince or princess until baby Cambridge joins us and the palace release an official statement.
According to The Sun, Kate and William have reportedly decided not to find out the gender of their baby.

Kate started out her pregnancy in pink but she's been rocking A LOT of blue of late - make of that what you will! 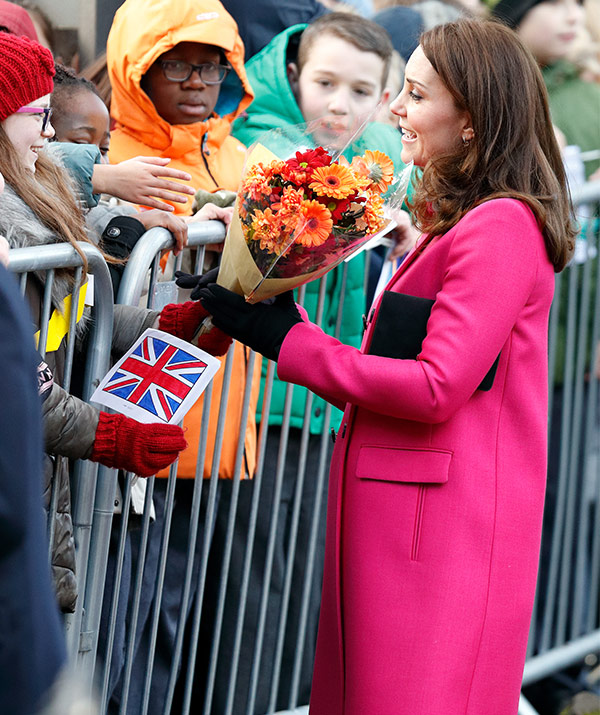 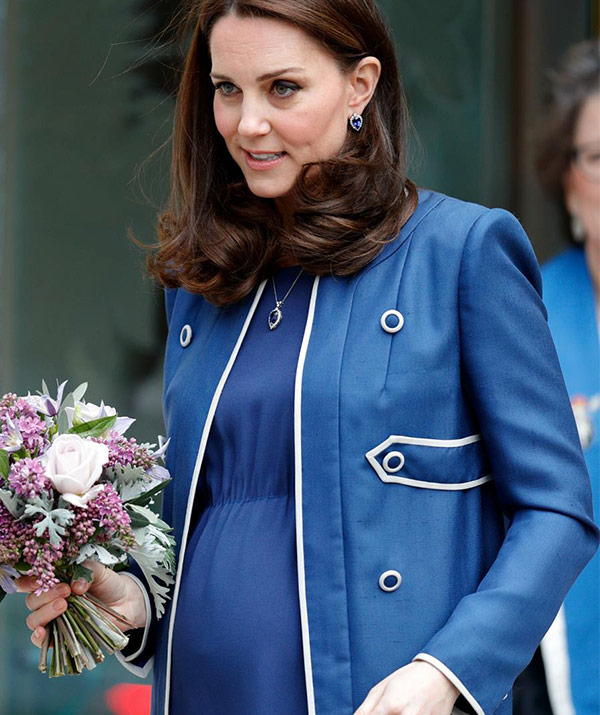 Is Kate Middleton pregnant with twins?

Like all of her pregnancies, outlets have claimed the royal is pregnant with twins, triplets and probably a unicorn.
In February, Prince William set the record straight on claims his wife was expecting double the joy.
The 35-year-old made the comments while attending the Centrepoint Awards at Kensington Palace and chatting to Raymond Stoner of Anston Properties.
When Stoner told him he could save time by having twins, William responded, "Twins? I think my mental health would be tested with twins."
The second-in-line to the throne later told another guest: "Two is fine — I don't know how I'm going to cope with three, I'm going to be permanently tired."
Well, that settles that then!

What have Prince William and Kate Middleton said about this pregnancy?

"[It's] very good news. We need Catherine to get over this first bit and then we can start celebrating. It's always a bit anxious to start with, but she's well." Prince William in September last year when the Duchess was suffering from severe morning sickness.
"Our third child is due in April, I'm getting as much sleep as I can." Prince William
"William's in denial [about having a third.]" Duchess Catherine

Want more on the Royal Baby?

- Every single time Duchess Kate reigned supreme with her maternity fashion choices
- Why Prince Charles might miss the birth of the third royal baby
- Duchess Kate to make Meghan Markle the godmother to her third child
- Princess Charlotte can't wait to be a big sister
- Duchess Catherine speaks emotionally about the difficulties of parenthood
Obsessed with the royals? Join our Facebook group for the latest updates on Kate Middleton, Prince William, Prince Harry, Meghan Markle and all things royal!