She's the self-described goddess who divided the nation after her controversial "marriage" to Dean Wells on Married At First Sight.While the cameras have stopped rolling, the drama hasn't for Tracey Jewel, 35.
In fact, she's continued to make weekly headlines for a variety of stories, but some of them just don't add up!
Now, Woman's Day can exclusively reveal the extent of Tracey's stories and what it's cost her.

The mention of her name makes me shake my head and think, 'What a nightmare!'" shares adultshop.com founder Malcolm Day of his former flame.
"I don't want anything to do with her and I've blocked her from contacting me."
Want more celeb gossip? Listen to the latest episode of the Woman's Day Uncensored podcast, where the team take you inside the Woman's Day picture meeting, reveal what's really happening on the set of the Today Show, plus they discuss the Tziporah Malkah slim-down photos everyone's talking about.
"The Tracey I know is very adept at talking herself up. She does it so often and with such conviction, she's very believable – and I believe she's got Australia bluffed," he says.
The 53-year-old self-made millionaire, who dated Tracey for 18 months until 2014, has decided to speak out because he says he's sick of hearing the tales the former MAFS bride's been twisting.
"She likes to play the victim, but one day all her shenanigans will catch up with her. I doubt she'll be able to find love long-term with anyone, because she's just such a nightmare," Malcolm adds.

Estranged from her birth mother!

Patricia Gaugg hasn't spoken to her daughter for more than three months, and it's not the first time the controversial reality star and her biological mother haven't been on speaking terms.
But Woman's Day understands Patricia, 53, from Augustine Heights, Queensland, has no plans to reconnect.
"I don't wish to comment," says the mum-of-four. "But I've been estranged from Tracey since March 2018."
After giving her newborn daughter up for adoption at just 18 years old, Patricia was overjoyed when she finally reunited with the baby she called "Rachel" 18 years later. The fairytale reunion went "next level" when Patricia walked Tracey down the aisle next to her adoptive mother Jenny on MAFS.
"It was good for television ratings, but behind the scenes Pat was sick and tired of the constant dramas that went with having Tracey in her life," confides a family friend.
It's understood the "nail in the coffin" came when Tracey started "playing" her TV husband Dean Wells.
"After announcing she was suffering from her experiences with Dean on the show, she then asked for him back while dating contestant Sean Thomsen," says the friend. "Pat no longer wants to be third party to that sort of game playing."

The real reason she was on Oprah

Tracey's continually bragged about being a special guest on Oprah, claiming scouts discovered her first book Goddess Within during a trip to Sydney in December 2010.
"What happened was Oprah was in Sydney and they [producers] came across my book somehow... Then they called me and it was a producer of the show. Within 72 hours I was on a plane to Chicago being interviewed as one of her guests," Tracey revealed in an interview with news.com.au.
Well, not exactly… It seems the reality star might be talking it up, as she told a very different story to That's Life! Tracey told them she received a call from a producer after  she wrote to the show about her reaction to Oprah guest Brenda Nesselroad-Slaby – a mum who'd accidentally left her child to die in her car.
"Watching Oprah saved my little girl's life," Tracey told That's Life! of her "Brenda-inspired" vigilance that saved her daughter from choking on a curtain cord.
"Tracey was never interviewed by Oprah," says Brenda, who sat opposite the talk-show host in the episode Tracey was in. "And there was absolutely no conversation about her book."
This isn't surprising because the book she claims producers discovered in Sydney didn't hit shelves until 2011 – after Oprah's show was recorded in Sydney in 2010.

By her own admission Tracey describes herself as "an author, professional speaker, awarded businesswoman (marketing, communications, strategy), reality TV star, and above all else, a mother."
While her professional LinkedIn account claims she completed a marketing qualification at Curtin University between 2001 and 2004, the mother-of-one told radio hosts Kyle and Jackie O in June, "I took four years to complete a three-year uni degree."
But a source claims it's not true. "She studied for a period of time… but she never completed the degree," the source spills.
And enquiries to Curtin University fail to link her to their graduates page. But that's not all!
Tracey also claims to have won the NEIS Small Business Award in 2008 and was runner-up for the St George Start-Up Awards in 2013, but St George began their "Kick Start" program in 2014.
Even allowing for this error, the bank has no record of Tracey receiving a grant of any kind.
"I'll need to check my records, but I did a three-month NEIS course in this time and they had awards, but I'd need to check my records on the exact timing," Tracey says.

The truth behind those cancer claims

She has previously claimed she was diagnosed with cervical cancer and underwent invasive surgery to remove lesions, even going so far as to suggest her "cancer" caused her to lose her hair. "(Hair never grows back after cervical cancer the same way) thank you for always… making my hair look fabulous!" she wrote in an Instagram shout-out to her hairdresser in April.
While Tracey has accurately described her diagnosis as CIN3 (cervical intraepithelial neoplasia), experts have confirmed that describing CIN3 as "cervical cancer" is inaccurate, confusing and alarming, and  it doesn't cause hair loss.
According to the Cancer Council, CIN3 is not cancer, but has the potential to develop into early cervical cancer over about 10-15 years if it is not detected and treated.
Professor Annabelle Farnsworth, director of cervical screening at Douglass Hanly Moir Pathology, also confirms CIN3 isn't cervical cancer. "CIN3 can be removed with a much less invasive procedure."

Tracey has self-published a series of books, offering everything from business advice to channelling your inner goddess. But it seems she isn't too worried about copying content.
In an article written by Tracey, which was published on website Kidspot earlier this year, slabs of content have been copied from a 2016 article by Brenda Della Casa on her blog YourTango.
More bizarrely, Tracey has taken direct inspiration from her ex-husband's wife, who is now stepmum to her daughter. Extracts from Emma's blog Kisses In Chaos, about life as a mum-of-five, and Tracey's Nine Honey article There Is Nothing Part Time About Being A Mum – are alarmingly similar. Emma's article was published in 2015 and Tracey's in 2018. It has now been removed.
Tracey says she wrote hers first, despite publishing it three years later.
"What I wrote was written before Emma's blog date, and I have the document time-stamped on my laptop at home, but I'm travelling at the moment," the reality star said in response to plagiarism accusations.
Slide across to see Tracey's article alongside the YourTango story. 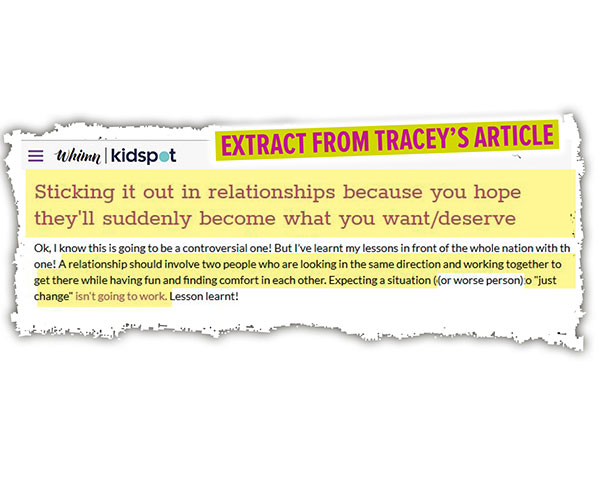 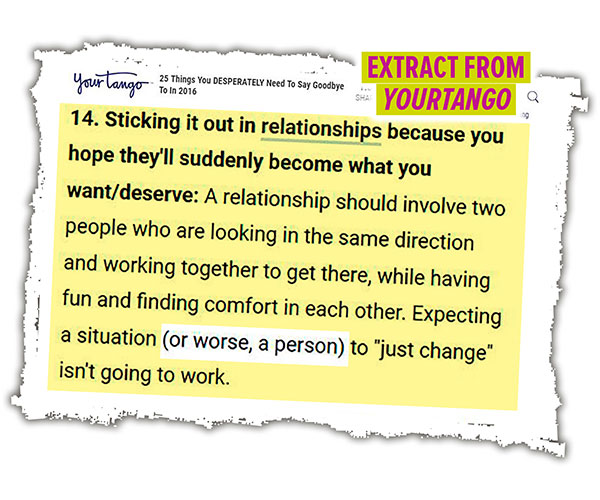