There's no denying the stars of I'm A Celebrity... Get Me Out Of Here! are put to the ultimate test.
They're subjected to rough sleeping conditions in the jungle, forced to face their deepest fears head first in terror-inducing challenges, not to mention being fed teeny tiny portions of beans and rice as their only sustenance.
But while we're sat firmly on our couches munching on popcorn and watching the entertaining show each night, it's hard to imagine just how bad it could be.
That is, until you see the dramatic physical toll it takes on the campers...
Do you have an I'm A Celeb tip or know one of the contestants? Email us with your tip off at NowToLoveTips@bauerxcelmedia.com.au
Past seasons of the reality television show have given us proof enough - last season's winner Fiona O'Loughlin lost a harrowing 8.2-kilograms, while royal butler Paul Burrell also lost eight kilograms in three weeks.
But it seems things have stepped up a notch this season.
In one episode where the eight remaining contestants participated in a weigh in, it was revealed that some celebs had lost up to 12 per cent of their body weight... now that's alarming.
But before we went celebrating their dramatic weight losses as some kind of victory, one celebrity pointed out a very poignant reason why we shouldn't.
Former Googlebox star Yvie Jones refused to weigh herself like the other celebrities, telling them: "We're going to celebrate how much weight we've lost and that somehow is something to be proud of, and I don't think it is something to be proud of."
Her words resonated with campers as she elaborated: "I [grew] up in a house where I was told one of the worst things to be was overweight."
"I can't actually tell you the last time I weighed my self... I wish we lived in a different world where what we look like doesn't matter."
Suffice to say we were stunned by her stirring words - and we couldn't help but applaud her like her fellow campers.
The show's medic, who was present at the time agreed, clarifying the purpose of the weigh in: "This is not a celebration about your weight loss — it's to give an idea of the harsh conditions your bodies have been through these past four weeks," he told them.
And these harsh conditions have been laid bare for all to see - keep scrolling as we take a look at the most dramatic weight losses from the campers of 2019.

Gossip guru Richard Reid's shocked reaction at his weigh in on the show was enough to know just how harrowing the jungle experience has been.
Discovering the he had lost a whopping 12.5 per cent of his body weight after a month in the jungle, Reid looked close to tears as the intensity of the past few weeks dawned on him.
But shortly after the shock discovery, he comically declared "pizza!", and rightly so - we're hoping he'll get one soon!
The stats:
Days in the jungle: 31 and counting
Weight lost: 12kg
Swipe for his before and after below! 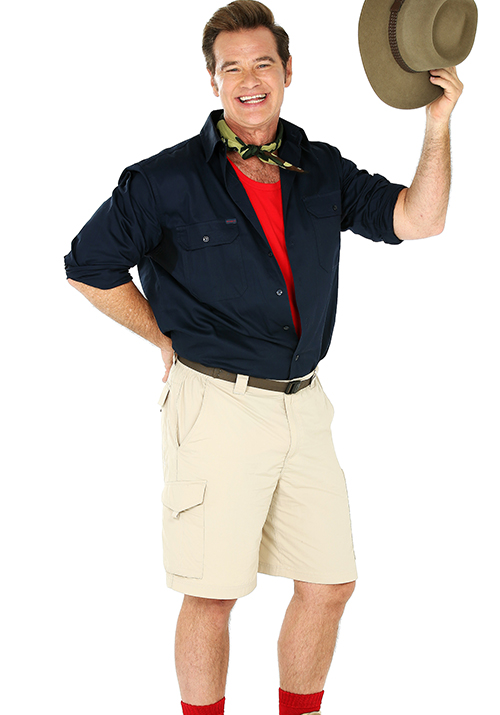 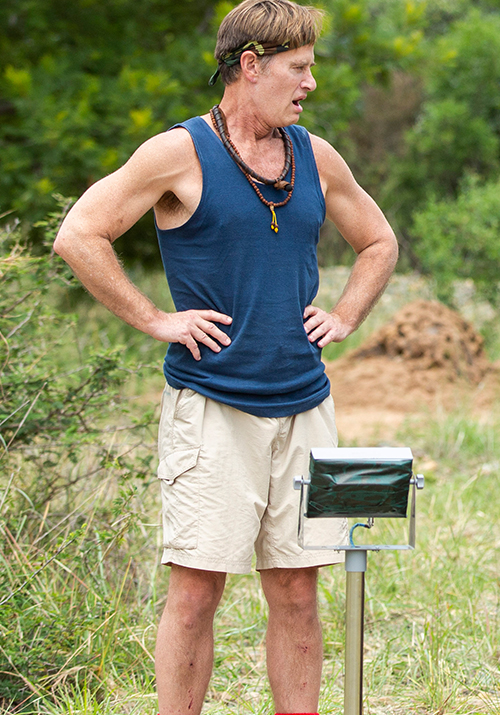 This model was in shape when he entered the jungle on day one, but things were looking quite different for Justin after 31 days in the jungle.
After being put through his paces in more challenges than you could count, the gruelling demands of I'm A Celeb life have taken their toll on the controversial brunette.
In fact, it was revealed Justin lost more than 11kg during his stint in the junle, so here's hoping he goes against the modelling grain by indulging in some serious comfort food now he's out!
The stats:
Days in the jungle: 31
Weight lost: 11kg
Swipe for his before and after below! 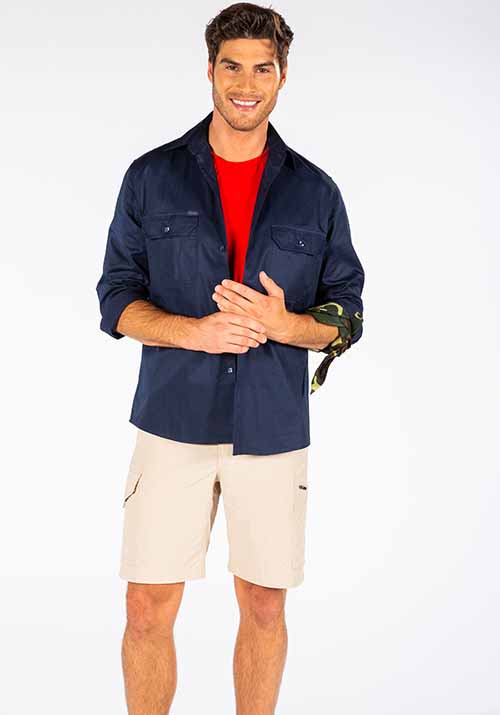 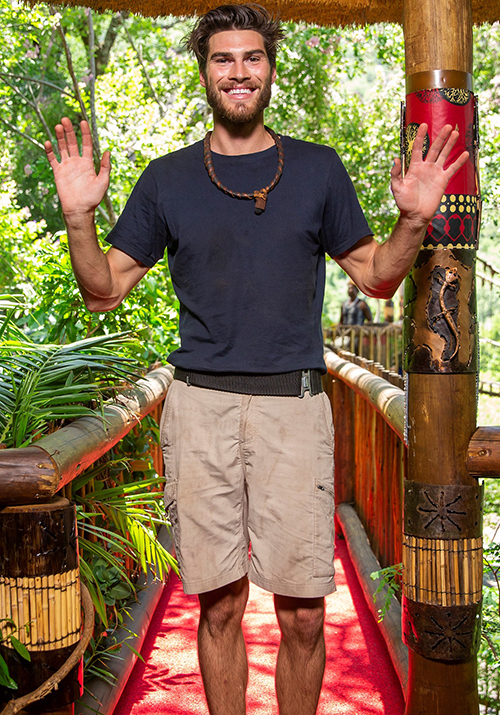 The former TV host and Home and Away star was not unfamiliar with the dramatic weight losses seen on I'm A Celeb in past seasons.
In fact, fellow camper Tahir Bilgic revealed that Luke had purposely gone into the jungle overweight knowing that he was going to be dropping some serious pounds!
And that he did - at the weigh in, Luke discovered he had lost a total of 11kg.
We're betting he'll be cracking into a pack of Tim Tams pronto upon exiting the jungle!
The stats:
Days in the jungle: 31 and counting...
Weight lost: 11kg
Swipe for his before and after below! 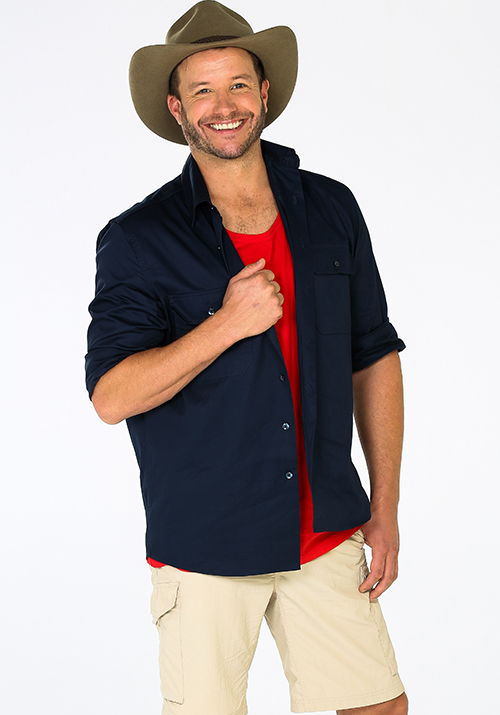 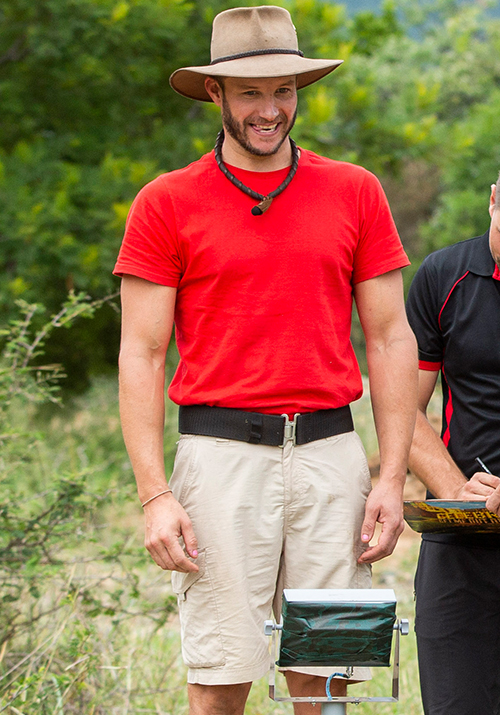 He may have won five AFL premierships and is commonly referred to as one of the greatest footy players of his generation, but this powerhouse athlete couldn't evade the jungle's dramatic effects.
After being the fifth celebrity eliminated from the jungle, Brereton was ready for a proper meal - or five.
"I lost 11 percent of my body weight!" he told Now To Love.
But the footy legend is hell-bent on making up for lost time (or more accurately, lost calories).
"On the way home to my hotel that I stayed in, I stopped off at the supermarket and bought nothing but junk food and it cost me AU $149."
Suffice to say we think Dermy earned the treat!
The stats:
Days in the jungle: 25
Weight lost: 11.2kg
Swipe for his before and after below! 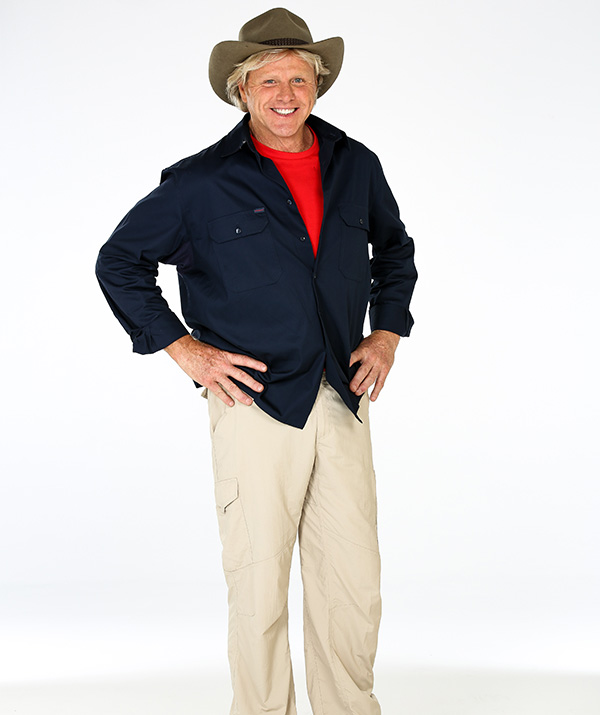 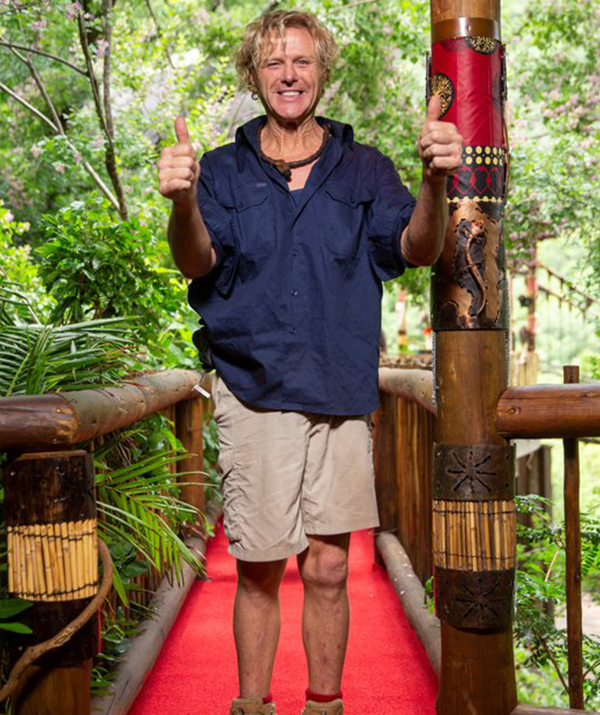 This MasterChef alum might be a pro in the kitchen, but the South African wild posed a whole different story for Justine.
And despite her genius hacks for making even the blandest meals of beans and rice taste good, it still didn't seem to do the trick.
"I'm tiny already so I just thought maybe I'd lose like a kilo, but after my weigh-in it looks like I've lost five kilos which is a lot for me," she told Now To Love.
That aside, there's only one thing for her to do now she's out of the jungle: "It means I can just gorge myself on many many hamburgers!"
The stats:
Days in the jungle: 28
Weight lost: 5kg
Swipe for her before and after below! 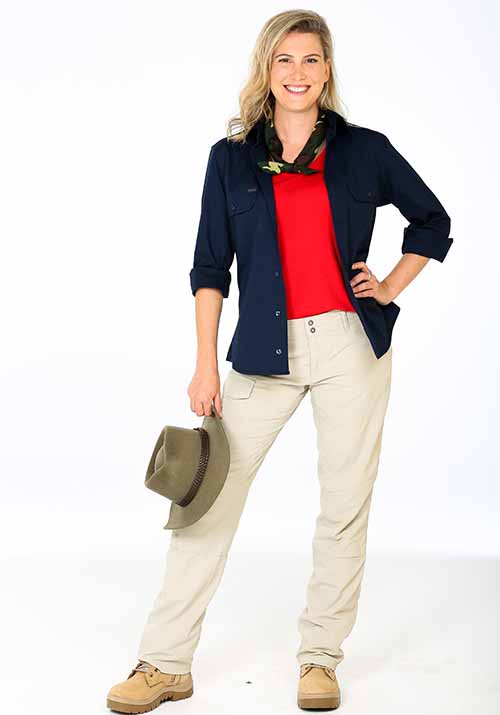 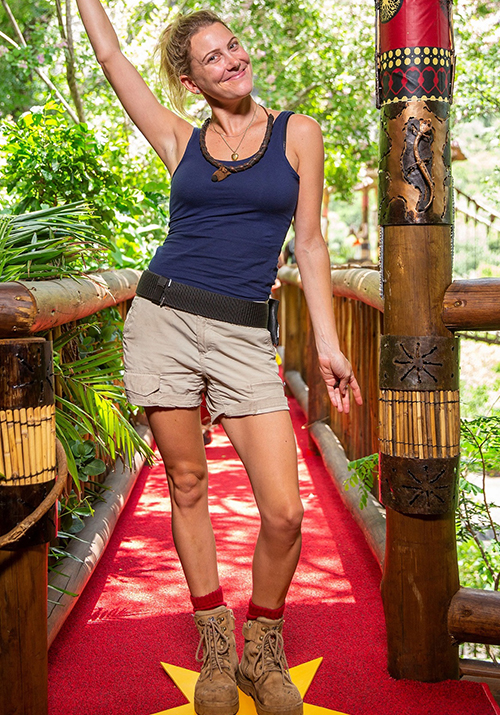 Another footy legend to be put through his paces, Shane Crawford's athletic physique certainly hasn't been exempt from the dramatic weight losses seen this season.
In fact, at weigh in it was revealed he's lost a whopping 8kg, despite having less time in the jungle than the others.
Here's hoping he gets a decent tucker soon!
The stats:
Days in the jungle: 221 and counting...
Weight lost: 11kg
Swipe for his before and after below! 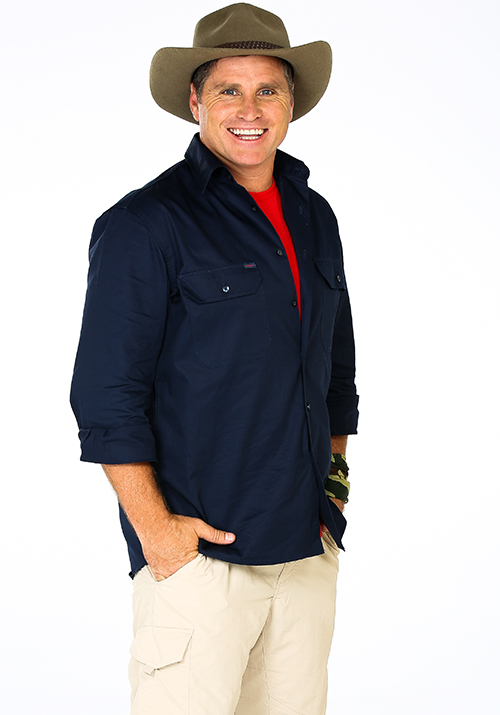 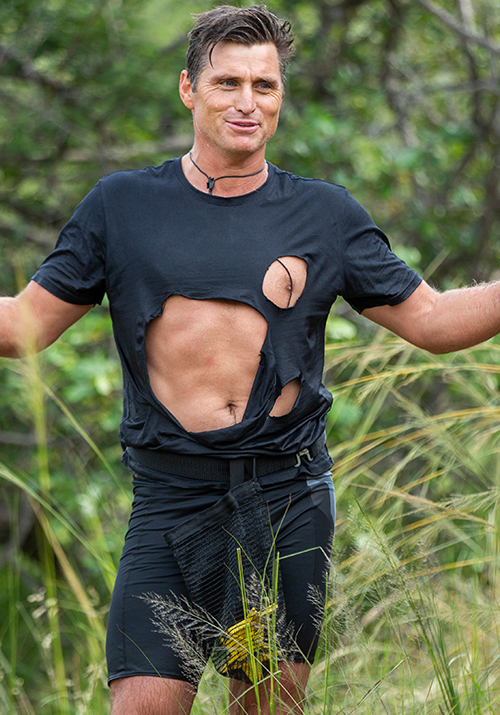 Much like Justine, Natasha was also subjected to the drastic physical effects of jungle life.
With a small build to start with, any weight loss on the TV presenter would be noticeable, but it was a shock to discover she had lost a whopping 5kgs in just 31 days.
Throughout the show, Natasha was keen to put herself on the line when it came to food, telling TV WEEK, "I definitely wanted to do a tucker trial just to see if I could... I love a challenge."
The stats:
Days in the jungle: 31
Weight lost: 5kg
Swipe for her before and after below! 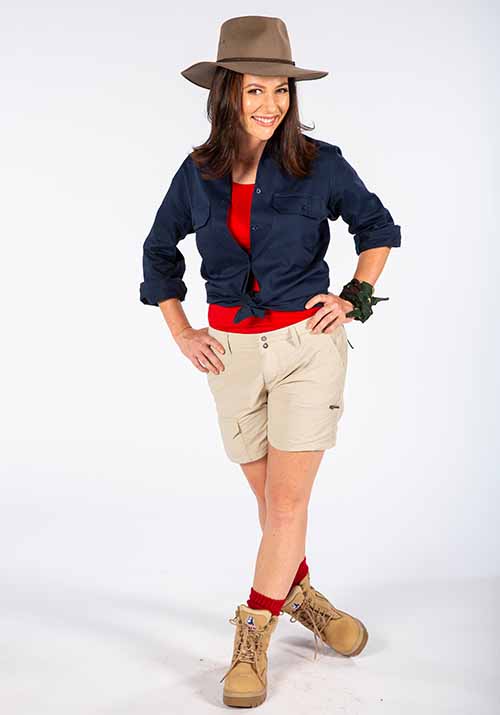 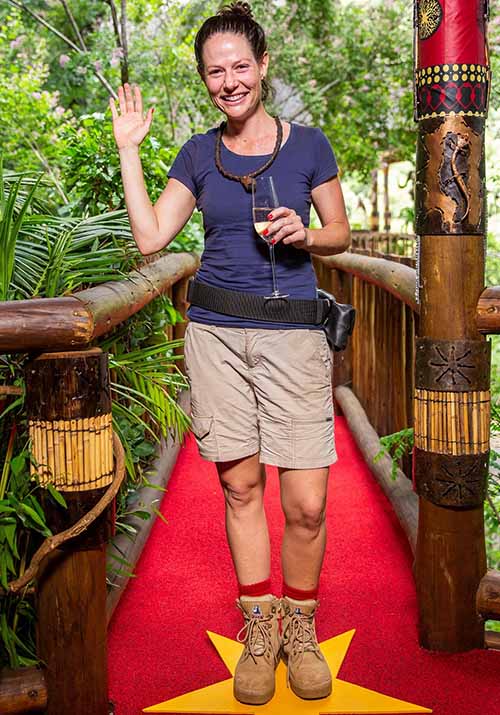 This petite Gogglebox star might be small, but she is most definitely fierce.
Making a bold impression from day dot by speaking her mind about everyone's favourtie frenemy Justin Lacko, as well as braving some tough challenges, the blonde Queenslander is a strong favourite to win the series.
At weigh in, it was revealed she's lost 3kg since entering the jungle - a sizeable amount given her small frame.
The stats:
Days in the jungle: 30
Weight lost: 3kg
Swipe for her before and after below! 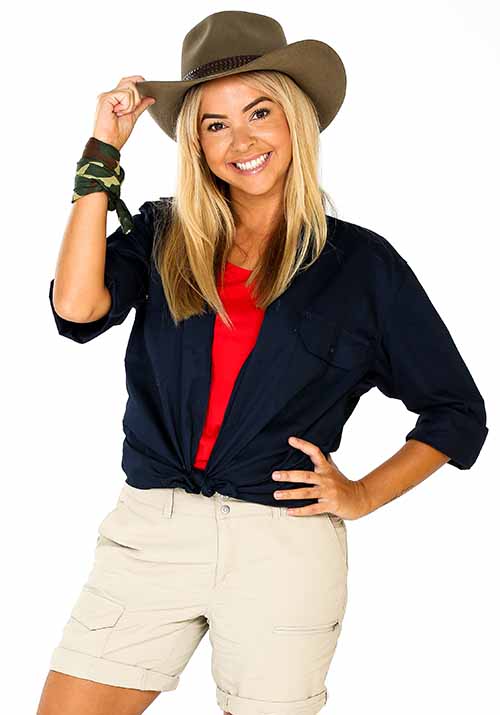 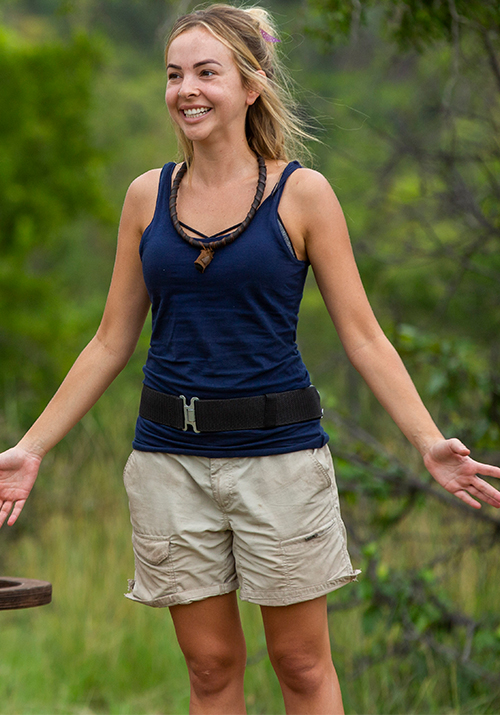 This striking daytime soap opera actress mightn't have felt bold upon her elimination from the jungle, but she still looked beautiful.
Katherine Kelly Lang was the fourth celeb to be eliminated from camp after being dropped in as an intruder little over a week before.
But that didn't stop the Bold and the Beautiful actress from feeling the harrowing effects of the jungle on her physique.
The fitness fanatic, who regularly competes in triathlons, said the jungle experience was both mentally and physically draining.
"I got so weak, so fast... I didn't know what was wrong with me, but I was losing like a pound a day - by the end of it I've lost 10 pounds," she told Now To Love.
And while she was gutted to leave the jungle so early, it might have been for the best!
The stats:
Days in the jungle: 7
Weight lost: 4kg
Swipe for her before and after below! 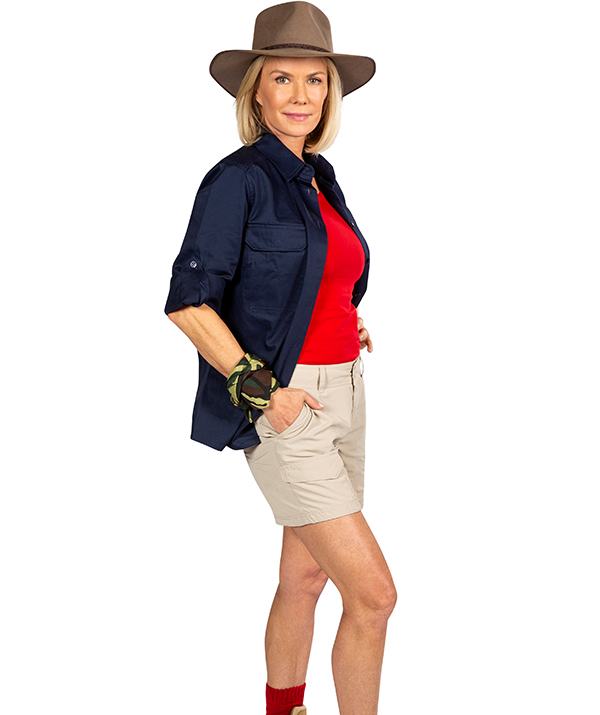 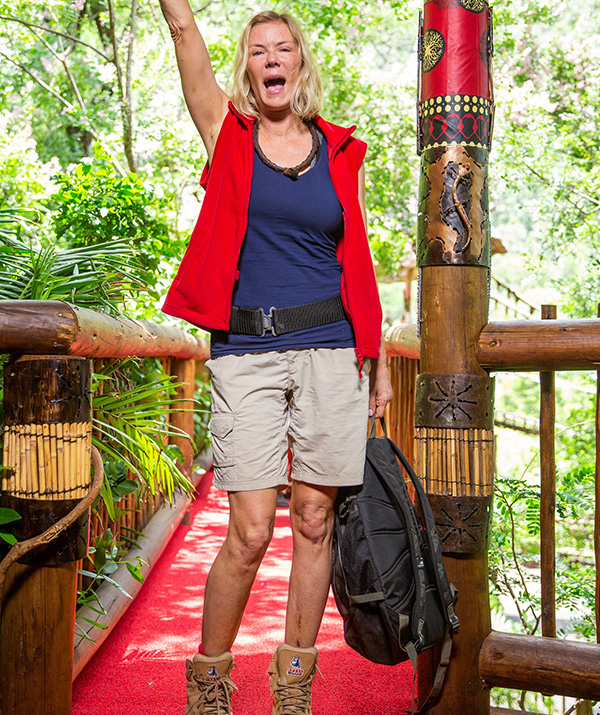 The controversial politician had us hooked from the get-go as she entered the jungle - and not just for her staunch opinions.
During one of the Tucker Trials, Jacqui went head to head with a boulder... and the boulder won.
Sustaining a nasty cut to her forehead, Jacqui was rushed to hospital for treatment - but she was back at camp in no time.
And while she was the third celebrity to be voted out of the camp, it seems the former Tasmanian senator was satisfied with her effort - physically, at least.
"I haven't looked this good in years! I'll be giving Justin [Lacko] a run for his money," she told us.
The stats:
Days in the jungle: 23
Weight lost: Unconfirmed, but enough to make her notice a big difference!
Swipe for her before and after below! 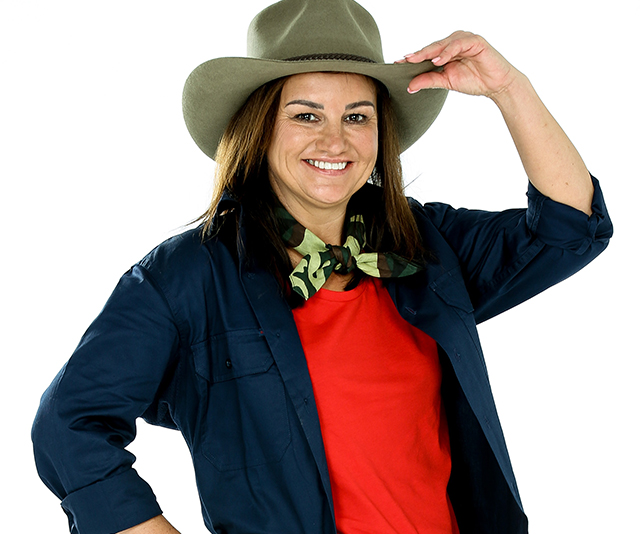 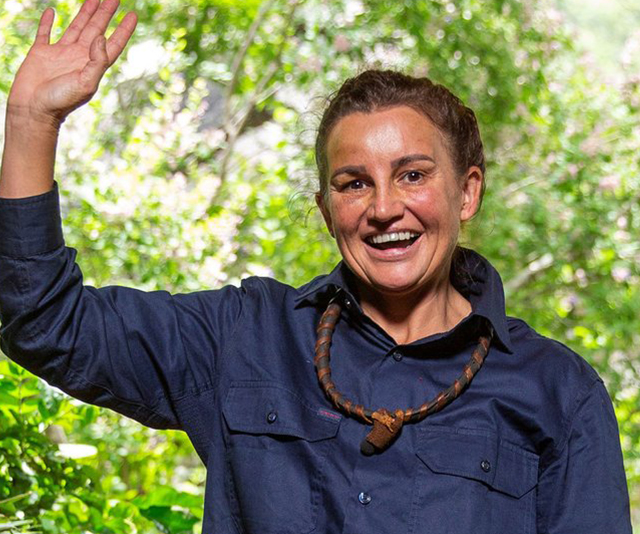 ← Slide →
WATCH: Justin Lacko causes a stir when he reveals what he dislikes about overweight people: