Who would've thought a dairy farmer and beautician from NSW would be in the House Rules finale?
Toad and Mandy, who hail from cheese country Candelo, admit they didn't have a clue for what they were in for when the competition started, and now they've made it to the grand final. With their down-to-earth attitudes, great teamwork and stylish taste, the couple have been fan favourites from day one and have a solid chance at winning the competition.
When asked what they would do if they won, Mandy said, "I daresay our house will be very full very quick and there will be a lot of beer and wine."
Crack open a cold one and take a look back at Toad and Mandy's highlights from their House Rules journey.
Speaking exclusively to Now To Love, judge Laurence Llewelyn Bowen says the couple are "phenomenal stylists" and have had an interesting journey as the show progressed.
"I mean for a start where the hell does that come from, they're dairy farmers, where does this glamour come from?"
But it's their teamwork that LLB has to admire.
"They take great strength from each other as a couple which is very beautiful to watch and I think Mandy, she's a very intelligent girl, definitely has an ability to absorb style very well but then always find her own take on it and I think Toad is very good at encouraging that in her."
The couple, who share adorable twins Lenny and Layla, plan to get married later in the year and say House Rules has brought them closer together.
"We don't need to follow tradition," Mandy, 28, explains. "We're not like that – and we thought it would be cute to have our own little kids walk down the aisle before me."
Though there have been a few bumps in the road for the couple.
During Jess and Jared's renovation in South Australia, Toad and Mandy struggled with the rules to 'style a New York high-line entertaining area' and 'bring the Bronx down the side,' as along with Josh and Brandon, they had never travelled out of Australia before.
Posting on Instagram, the couple said, "It's almost hilarious but with no time to stop and ponder, getting into some demo will at least clear the area for some new plans."
But they did a pretty good job with the pizza joint in the end, even though Toad ended up in hospital to have nine stitches after cutting his finger almost to the bone.
When the final three teams were renovating widow Chelsea Dunley's home, Mel stuck a note on Chelsea's original vanity, claiming it as hers, but then abandoned it in favour or something rather similar to Mandy's idea.
"The little note on the vanity was quite shocking," Mandy told TV WEEK. "I think that was just very pushy and greedy."
WATCH: Mandy accuses Dave why the couple copied her design.
Toad and Mandy have consistently raised the bar when it comes to renovating and take risks that many professional interior designers would never do...and yet they work.
The couple admit that Toad's the one to do the demolition while Mandy, who has a great eye for design according to her husband, does the shopping.
As for their favourite makeover, both had no hesitation in saying Leigh and Kristie's den in Victoria.
Take a look below! 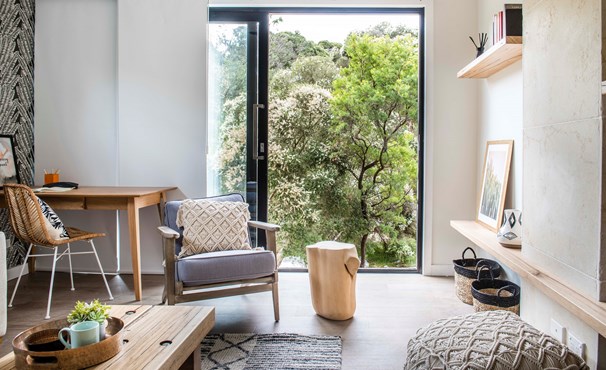 ← Slide →
Aside from their amazing renovations, Toad and Mandy have also come out of the competition with some solid friendships.
After Chiara and David were eliminated and just missed out on the final, the couple shared a sweet tribute to their friends on Instagram. And it's clear David and Chiara have their friends' backs for the final and will be flying the flag for Team Toad and Mandy.
"They're one of the most genuine people," says David.