Walking in the front door, I heard my favourite song Perfect by Ed Sheeran blasting on the stereo.
"Oh my god, this is it," I gushed.
My partner Luke, 26, and I had been together for a decade and I'd been hinting at a wedding for years.
I'd even taken his sister, Renae, shopping to show her the diamond engagement ring I wanted.
"Just in case he asks, it's what I want," I told her, cheekily.
And the way my son from a previous relationship Jayden, 11, and daughter Lacey, eight, were grinning giddily, I suspected the big moment had finally arrived.
"Where's Dad?" I asked them.
"Why don't you go into the bedroom and find out," Lacey answered, beaming.
I walked in to find hundreds of rose petals strewn on the bed with a card and a box beside it.
"Will you marry me?" the card read.
Luke was standing at the side of the bed laughing as I opened the ring box.
It was the beautiful ring I'd shown Renae.
"I love it," I said, hugging him.
Unfortunately, we still needed to save enough money for our country-style dream wedding so we booked our venue 18 months in advance.
Six months later, I started feeling nauseous and tired.
I explained my symptoms to my GP and he thought I was run down.
"You need to slow down," he told me.
As months passed, my sickness continued and I felt more lethargic.
I went back to my GP but he thought I was overreacting.
Then I suddenly started bleeding heavily.
"Another irregular period," I told Luke.
Within hours, the bleeding became so heavy I drove to the hospital.
Luke met me there and we sat in shock as doctors and nurses rushed around me, carrying out tests.
"You have cervical cancer that has spread through your lymphs and up through your chest and into your lungs," a doctor told me.
My heart thudded with fear as he explained I'd been carrying the cancer for over a decade and a simple pap smear would have picked it up.
Luke had been asking me to go for one, but I'd been so busy with the kids and working in my admin job I kept putting it off.
"It's terminal," the doctor said softly. "We can try radiation and chemo, but the tumour is too big for surgery."
Did the doctor just give me a death sentence? I panicked.
I was only 29 years old and planning my dream wedding.
"How much time do I have?" I asked, tearily.
"Maybe a year or so," he replied.
As soon as we got to the car, Luke and I broke down in floods of tears.
I tried to put on a brave face for the kids, but they could sense my despair.
"I've got cancer," I said.
"Are you in pain, Mummy?" Lacey asked.
Then my mind turned to my big day, which was six months off. I'd waited so long for it, now I might not even be well enough to walk down the aisle.
"I don't want to wait any longer," Luke said. "I want to marry you now."
I cried a river as we agreed to have a simple ceremony before I had to start my treatment in two months' time.
I didn't feel up to calling the celebrant, Sharon, to fill her in so my mum kindly offered.
A few days later, Sharon came to visit.
"My friend has a wedding company and she wants to pay for your wedding," she said.
She then told us a venue had been organised, a short honeymoon in Port Stephens, a horse and carriage, a photo booth, DJ, food, alcohol and table settings.
I was overwhelmed by the generosity of our community.
"I can't believe strangers want to do that," Luke said.
I was so grateful; there was just one thing I yearned for.
What I couldn't bear to voice was that I wouldn't be around for my girl's wedding day in the future, so I wanted her to have a part of me with her.
My friend set up a GoFundMe page for my dress and raised enough for me to buy a beautiful silk gown.
My eyes stung with tears as my dad and Jayden walked me and Lacey down the aisle on the big day.
"I promise to love you forever," Luke said. "Even though our forever is so uncertain." "We'll make every moment count," I said.
The generosity continued when a charity donated tickets for us to see Ed Sheeran a month later.
A friend even arranged for me to meet him backstage!
"Good luck with your treatment, Jess," he said as he signed my records. 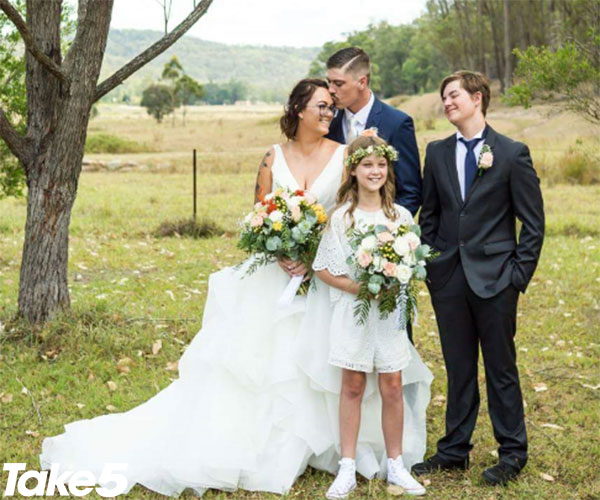 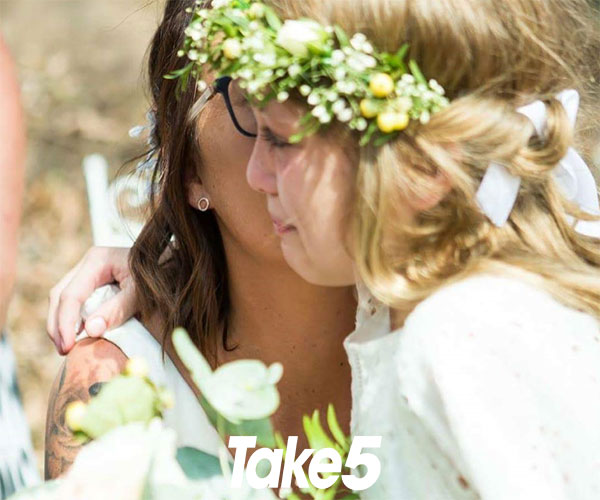 ← Slide →
I've been undergoing chemo for six months now.
While I've responded well, doctors can't tell how long I have left.
I don't want to dwell on the what-ifs but it's hard.
I keep thinking of all the things I'm going to miss out on – the kids' graduation, weddings, grandkids, and most of all, my darling Luke.
I've packed up my wedding gown for Lacey and started making a diary and video for the kids so I can tell them everything I won't get a chance to later – like how much I love them and how proud I am.
Look after your dad, I've written.
Luke and I may not have our happily ever after, but I'm determined the time our family has left together will be perfect.