My heart pounded as I stared at the pregnancy test.
"We're going to have a baby," I gasped to my hubby, Harley.
They were the words I never thought I'd say.
After two failed attempts at IVF, I'd learned not to get my hopes up.
So when the doc confirmed I was having a baby, Harley and I were ecstatic.
But my excitement soon gave way to fear when, after giving birth to baby Alexis, I saw that her tiny feet, back, stomach and hands were all red-raw.
"Is she okay?" I trembled to a nurse.
With no skin covering the flesh, she looked like a burns victim.
Only a few hours old, Alexis was transferred to the NICU ward and wrapped in bandages like a mummy.
"Alexis has Epidermolysis Bullosa, a rare genetic skin condition," a doctor explained bluntly.
"She'll be bedridden, never walk and in pain for the rest of her life. You won't be able to touch or kiss her because she'll blister straight away."
He also said she'd have a short life expectancy.
After he left, Harley and I looked at each other in stunned silence, trying to process the awful news.
"Did he really say all that?" Harley croaked.
To be told my precious baby was going to have a short and tortured life was too much to process.
We were transferred to see a specialist, where we expected the worst.
But to our relief, the dermatologist was more hopeful.
"Alexis will be able to lead a relatively normal life. You'll be taking her home next week," she said.
She was even confident that I'd be able to hold Alexis like I longed to do.
It wasn't all good news though.
Stopping more blisters and skin tears was impossible.
All we could do was minimise the damage and protect Alexis from infection. 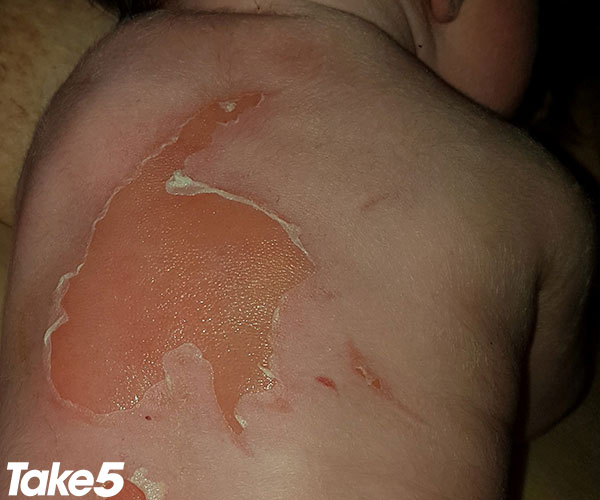 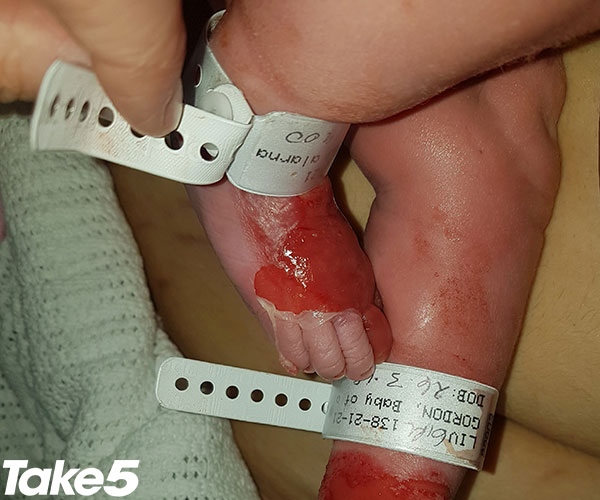 ← Slide →
The next day a specialist began teaching us how to look after Alexis.
"Even slight pressure can blister and tear her skin," she said, showing us how to pick Alexis up slowly and gently, supporting her neck and bottom.
We were warned not to pick her up under the arms which would wrinkle and tear the skin.
But no matter how careful we were, new blisters would inevitably form.
Alexis' little hands were bandaged but already the friction of her fingers against the fabric was causing blisters.
"You have to lance them with a sterilised needle," the nurse said.
I was horrified at the thought of sticking a needle into my baby.
But the alternative was a blister that would fill with fluid, spread and potentially cause a huge festering wound.
Harley and I worried if we'd ever learn how to do it properly.
As a panel beater, he feared his hands were too rough to hold our baby.
When we brought Alexis home three weeks later, the first thing I realised was that everything with an EB baby took much longer.
In the morning we had to carefully get Alexis up, take off her dressings, check for blisters, change and bathe her before carefully reapplying her dressings.
That took at least 90 minutes.
Changing a nappy was a 10-minute ordeal.
I was scared of causing a tear in her skin and went very slowly and carefully.
Despite being incredibly gentle we couldn't avoid causing some blisters.
"I feel terrible," I choked to Harley.
We'd been told that having EB was like having third-degree burns.
"She must be in pain a lot but she's so happy," Harley often marvelled.
We gave her pain killers when she was crying and the blisters were bad, but most of the time she didn't need them.
Newborns discover the world and learn by exploring with their hands.
Alexis's were bandaged until she was seven months old, so she was a little behind.
At least she was able to start going to day care.
"We can't treat her like a porcelain doll. We have to make her life as normal as possible or what kind of life is it?" I said to Harley.
He agreed.
I showed the daycare staff how to care for Alexis.
They were fantastic and happy to do everything she needed.
From the way Alexis excitedly kicked her little legs, smiled and waved her arms, I could see how much she enjoyed it.
We also got some support from DEBRA, an international charity which helps EB sufferers.
Swathed in dressings, Alexis was often unbearably hot.
The charity bought her a portable air-con unit which brought a lot of relief.
Alexis is now ten months old.
She's not crawling yet.
When she does start, I'll have to get her pads to protect her knees, arms, hands and legs.
New blisters and wounds are inevitable then and always will be.
It's just something we've got to deal with.
We wanted a baby so much.
Sadly, life for our little girl isn't likely to be easy.
We're determined to give her every opportunity to enjoy it though.
"We can't wrap her in cotton wool," Harley says.
And he's right. But she'll always be wrapped in our love.