When Duchess Catherine stepped off the aeroplane to make her grand arrival in Pakistan, it would be safe to say our breath was collectively taken away.
Wearing a stunning turquoise outfit, which is traditionally known as a shalwar kameez in Pakistan, Kate looked like a true Princess in a custom Catherine Walker design.
And while the royal looks incredible in basically everything, there was something particularly special about this outfit.

Kate and William kicked off their five-day tour of the South Asian country on Monday, October 14, landing via a private flight in Pakistani Air Force Base Nur Khan
The royals looked fresh as could be as they exited the plane, taking the rolled out red carpet by storm in their formal attire.
But it was Kate's ombré turquoise dress that really stole the show, especially given that it heavily resembled Princess Diana's iconic pale blue ensemble which she previously wore during her own visit to Pakistan back in 1996. 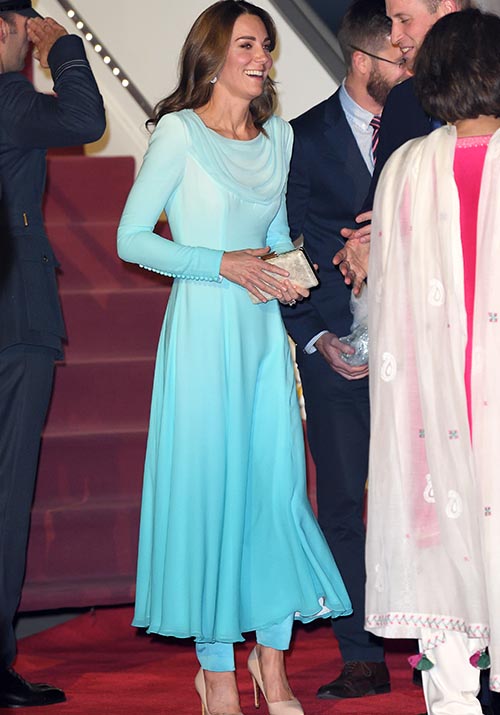 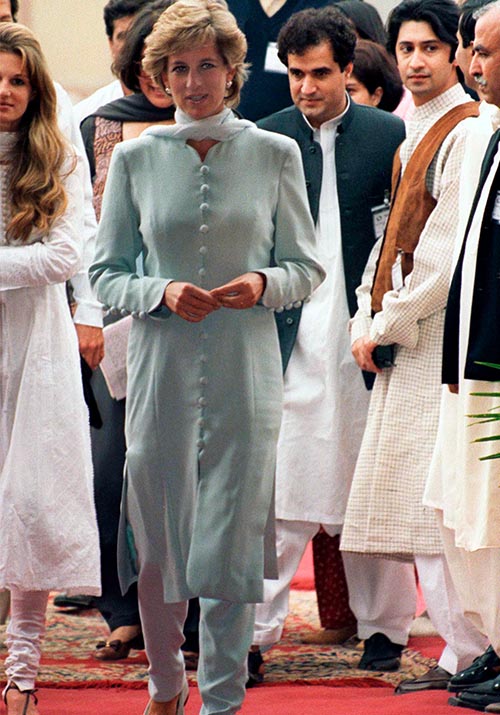 ← Slide →
While Kate's cowl-neck custom creation looked flowy and elegant, Diana's button-down ensemble had some slight differences, but there's no denying the two royal ladies were mirroring each other in a very special way.
Throughout the duration of this royal tour, it is expected that the Duchess of Cambridge will take some of Diana's stunning style cues from when she toured the country in the 1990s.
For one, it's almost certain that the 37-year-old Duchess will wear a lot of green - a nod to Pakistan's flag.
The colour palette was also heavily adopted by Princess Diana during her time in the country.
It's part and parcel to see royals respect and highlight local and cultural values through their fashion choices while on tour.
That's why Kate's decision to continue wearing green hues is all the more special, as it is also considered a customary colour of respect in Pakistan.
Earlier this month, the Duchess stepped out in a beautiful flowing tea dress, which was coloured teal, and featured a green tie at the waist. She also finished the look with a pair of green pumps.
The engagement was held in anticipation of the royal tour in Pakistan, which foreshadowed a week of glorious fashions to come for the Duchess.
As the tour continues, stay tuned for more poignant fashion moments from Kate - we'll be sure to keep you updated on every single look.
And, if her grand debut in Pakistan is anything to go by, we're pretty sure we're about to see many more twinning fashion moments between Kate and Diana over the coming days.
WATCH: Princess Diana's most iconic off-duty style moments: